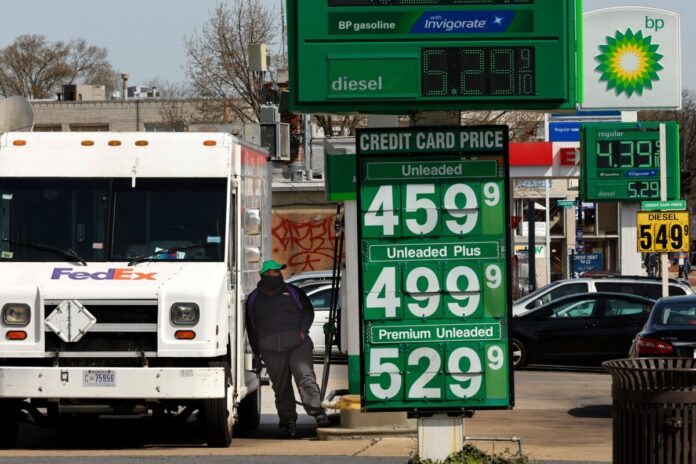 The Biden administration is planning to allow sales of higher-ethanol gasoline blends throughout the summer months as part of measures to address the increasing fuel costs driven by Russia’s invasion of Ukraine.

“The president is committed to doing everything he can to address the price increase Americans are facing at the pump,” a senior Biden administration official said during a background press briefing on Monday evening.

President Joe Biden will announce on Tuesday that the Environmental Protection Agency (EPA) administrator is planning to allow E15 gasoline—that uses a 15 percent ethanol blend—to be sold this summer.

Adding more ethanol to gasoline blends could potentially reduce prices at U.S. gas pumps because ethanol, which is made from corn, is currently cheaper than straight gasoline.

“This is the latest step in expanding Americans’ access to affordable fuel supply and bringing relief to Americans suffering from Putin’s price hike at the pump,” the administration official said.

Fuel prices hit a record in March following Russia’s invasion of Ukraine which began on Feb. 24. The United States and other consumer countries have banned imports of oil from Russia, a major world supplier, to punish it for the invasion.

The EPA plans to issue a national, emergency waiver to allow summer sales of the E15 gasoline, the official explained. The official noted that without this action, E15 could not be used in most of the country from June 1 to Sept. 15 over concerns that E15 contributes to smog during warmer weather.

The agency is likely to issue the emergency waiver closer to June 1, the official told reporters.

“E15 is currently offered at 2,300 gas stations in the country, where it can serve as an important—and more affordable—source of fuel,” the official said.

“Allowing higher levels of blending will also reduce our dependency on foreign fuels as we rely more heavily on home-grown biofuels. This will help us bridge towards real energy,” a handout of the briefing said.

The EPA is also considering additional action to facilitate the use of E15 year-round, the administration official said.

The Renewable Fuels Association (RFA), a lobbying group, announced on Monday a campaign to push for sales of E15 gasoline year-round, describing it as the lowest-cost, lowest-carbon fuel available at the pump.

“As American families continue to struggle with high gas prices, there’s a simple solution that can immediately relieve their pain at the pump: increasing the availability of renewable fuels and allowing year-round sales of lower-cost E15,” said RFA President and CEO Geoff Cooper.

“More ethanol means more savings at the pump, as ethanol has recently been selling for nearly $1 per gallon less than wholesale gasoline. As war in Ukraine continues to roil global energy markets, we need to strengthen our nation’s energy security, and expanding the use of low-carbon renewable fuels like ethanol is the right move at the right time,” Cooper added.

The RFA notes that the E15 blend has typically been priced 15–25 cents per gallon less than regular gasoline.

The Epoch Times has contacted the EPA for comment.