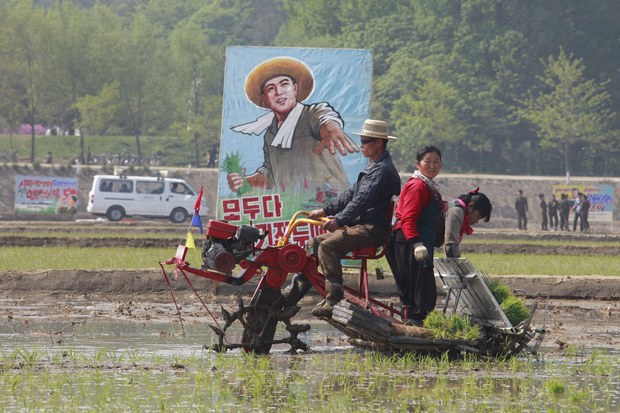 The North Korean government’s order to cancel the debts of collective farms is causing reluctance among wealthy lenders to issue new loans to farmers, a major funding setback that could hamper the country’s ability to produce food this year, sources told RFA.

After a devastating famine from 1994-1998, North Korea’s cash-strapped government stopped subsidizing collective farms, instructing them to become self-reliant. The loss of state funding led farm managers to seek loans from wealthy North Koreans with the promise that after the fall harvest, they would repay them in harvested crops worth twice what was borrowed.

The farms were still obligated to produce enough food to satisfy quotas mandated by the state under this new system, and as long as the harvests went according to plan, there was enough to pay off both the lenders and the state. Poor harvests in 2021 made both impossible.

But during a meeting of the Central Committee of the ruling Korean Workers’ Party in December, the country’s leader, Kim Jong Un, declared that North Korea would take special measures to cancel the debts incurred by collective farms to the state, meaning that they were off the hook for the 2021 production quota.

This also meant indirectly that private debt was canceled, as the whole point of forgiving the farmers’ state debts was so they could get back to farming in 2022 with a clean slate. But the move seems to be backfiring, as lenders are now unwilling to provide the collective farms with capital.

“It’s not like last year, when the farm officials could just go into the city and borrow 10,000 yuan [U.S. $1,577] from wealthy lenders,” a resident of Ryongchon county, in the northwestern province of North Pyongan, told RFA’s Korean Service on condition of anonymity for security reasons.

“This year they don’t even want to lend just 100 yuan, so all the farm officials are really getting anxious,” said the source.

According to the source, after Kim Jong Un gave the order in December, law enforcement officials threatened lenders that they could be branded as anti-socialist for engaging in capitalistic activities.

Wealthy North Koreans who did lend money to the farmers may never be repaid, a source from Musan county, in the northeastern province of North Hamgyong, told RFA on condition of anonymity to speak freely.

“They have their money taken by the state-run collective farms with their eyes open. Even if they want to try to get it back, they are afraid they might get caught and punished as an example to others,” the second source said.

“They are complaining that the debt cancellation measure is really the state’s confiscation of their wealth,” said the second source.

The policy could jeopardize a system that has been in place for decades, Seo Jae-pyoung, the secretary general of the Seoul-based Association of the North Korean Defectors, told RFA.

“Farm officials have been borrowing rich people’s money every year under the party’s policy of self-reliance since the Arduous March of the 1990s,” he said, using the local term for the 1994-1998 famine, which killed millions.

“They have set up and built trust with the rich lenders through loan transactions with them. This relationship of trust has been broken by the authorities, which will be an unfavorable factor for the collective farms,” said Seo.

Another North Hamgyong resident told RFA that the mercantile class has all the money in North Korea.

“The country doesn’t have the money. … Farms don’t have money to buy gasoline, so they borrow the money from the rich. They have to plow the fields, but they can’t run the tractors without gas, which they have to buy illegally,” the second North Hamgyong resident said.

The sudden cancellation of farm debt is causing confusion among farm managers this year because the farms are still supposed to be self-reliant even if they cannot find funding, a resident of South Pyongan, north of the capital Pyongyang, told RFA.

“The farm officials are urgently visiting the rich lenders on the down low to ask them to lend them money again this year. They say they will pay back even more than double,” the South Pyongan source said.

“If they refuse to lend, some of the officials are even offering to lend them farmland,” he said.

North Korea canceled collective farm debt only once before — in the 1960’s — under the rule of Kim Jong Un’s grandfather, national founder Kim Il Sung.

Translated by Claire Lee and Leejin Jun. Written in English by Eugene Whong.