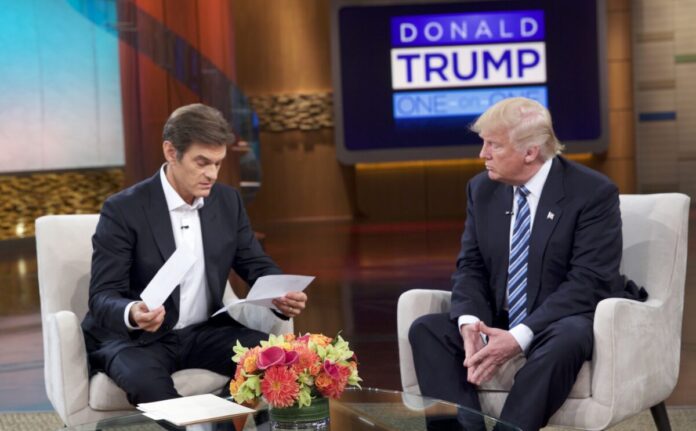 “The Great Commonwealth of Pennsylvania has a tremendous opportunity to Save America by electing the brilliant and well-known Dr. Mehmet Oz for the United States Senate,” Trump said in a statement.

Oz, a celebrity cardiothoracic surgeon who is best known as “Dr. Oz” on television, is running as a Republican. In the state GOP primary, Oz is facing off against fellow Republican Dave McCormick, a former hedge fund manager.

“I believe that Mehmet Oz will be the one most able to win the General Election against a Radical Left Democrat looking to do unthinkable harm to our Country,” Trump also said. “They know him, believe in him, and trust him. Likewise, he will do very well in Philadelphia and Pittsburgh, where other candidates will just not be accepted,” he added

Oz entered the race late after former Republican candidate Sean Parnell dropped out of the race amid a publicized custody battle over his children. Parnell was endorsed by the former commander-in-chief before he suspended his campaign in late 2021.

After Trump’s announcement, Oz said that he is “honored” to have received “President Trump’s full support, and I thank him for that,” according to a Twitter post. “President Trump knows how critical it is to change the kinds of people we send to Washington. I’m ready to bring an America First agenda to the Senate for Pennsylvania.”

Parnell, meanwhile, offered critical words for Trump after he endorsed the doctor, writing to Oz: “You’re not America First. You’re not a conservative. You’re not even from Pennsylvania.” Parnell had endorsed McCormick.

“I’m disappointed by this. Oz is the antithesis of everything that made Trump the best president of my lifetime—he’s the farthest thing from America First & he’d be very bad for PA,” Parnell said Saturday.

“He knows his job is to serve every single Pennsylvanian,” the former president added. “Dr. Oz is smart, tough, and will never let you down, therefore, he has my Complete and Total Endorsement. Good luck, Dr. Oz. our Country needs you!”

Last month, President Joe Biden asked Oz and Herschel Walker, a Republican Georgia Senate candidate, to leave the Presidential Council on Sports, Fitness, and Nutrition. The two were previously appointed to their posts under the Trump administration.

Oz’s campaign said in March that he was removed from the council in what he described as a politically motivated move.

“One week and three different explanations later, President Biden finally informed me today why he fired me from the Presidential Council on Sports, Fitness, and Nutrition,” Oz said in a statement on March 30. “This was a political firing because I’m calling out Biden’s failures on inflation, immigration, and COVID. The Woke Left will not silence or stop me from being a bold, conservative voice in the U.S. Senate.”