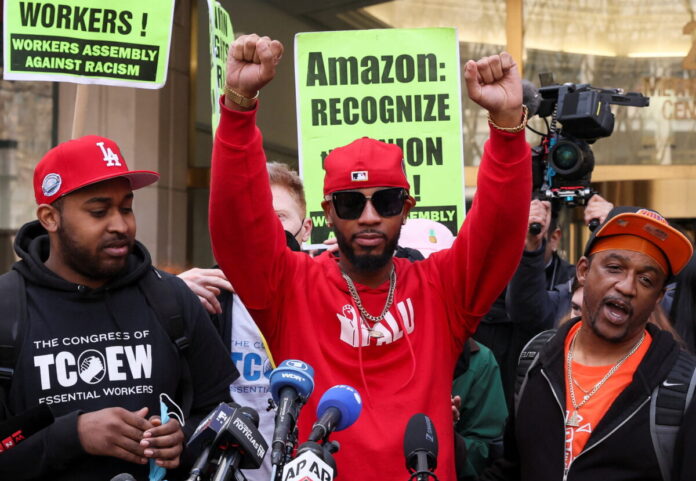 NEW YORK—Amazon.com Inc. on Friday called for an election rerun after workers at a New York City warehouse voted to create the company’s first U.S. union, saying that the U.S. labor board and worker-organizers suppressed turnout.

The Amazon Labor Union (ALU) rejected the allegations made by the online retailer that is the second-largest U.S. private employer.

Amazon made its demand a week after the victory for organized labor. Some 55 percent of employees who voted from Amazon’s JFK8 warehouse in Staten Island opted to join the ALU, which has argued for higher pay and job security. Turnout was about 58 percent.

Amazon spokesperson Kelly Nantel said in a statement: “We want our employees to have their voices heard, and in this case, that didn’t happen—fewer than a third of the employees at the site voted for the union.”

Amazon also accused the ALU of intimidating workers and distributing marijuana to gain votes in its favor, according to a company filing on Friday.

Derrick Palmer, vice president of the ALU, said Amazon is trying to “demean our character and undermine our efforts.”

The National Labor Relations Board (NLRB) now must process Amazon’s objections before certifying the election result. The timing for this was not immediately clear.

In its filing, Amazon said the NLRB improperly helped the ALU gain standing to hold an election and created the impression that it supported the union. Amazon also accused the NLRB of hampering turnout through mismanagement in the polling area and by allowing camera crews on site that scared away voters.

An NLRB spokesperson declined to comment on these objections but the board has said previously that it is independent and that its enforcement actions against Amazon have been consistent with its congressional mandate.

The ALU pushed back against Amazon’s claims, saying the company did not contest low turnout in a prior union election in Alabama in which workers voted against organizing. The ALU said it was Amazon that had intimidated workers and the union has filed dozens of unfair labor practice charges against the company.