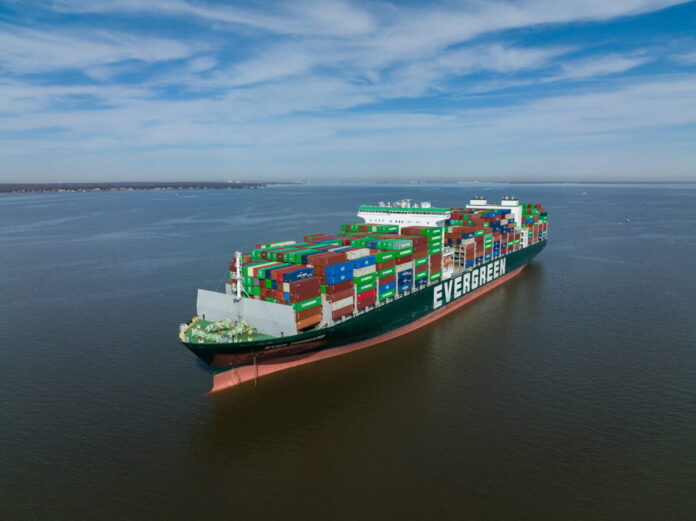 Dredging has not budged the stuck cargo ship in the Chesapeake Bay so now there is a new plan to make it lighter and hopefully more buoyant by removing at least some of the 4,964 containers loaded on its deck.

The Ever Forward has been stuck in the muck since March 13. It ran aground in water 24-feet deep when leaving Baltimore on its way to Norfolk, Virginia.

The entire length of the hull, 1,096-feet long and 145-feet wide ship is grounded the Coast Guard told The Epoch Times.

“Salvage experts determined they would not be able to overcome the ground force of the Ever Forward in its current loaded condition,” the Coast Guard said in a statement “The new strategy offers the best chance of successfully re-floating the Ever Forward. The previously announced dredging will continue to a depth of 43 feet and shipping containers will now be removed as soon as the installation of two crane barges, with suitable lift heights to remove containers, are installed.”

For safety, the containers will be removed only in daylight hours from both the port and starboard sides and set on receiving barges. The barges will then shuttle the containers back to their original onboarding facility, Seagirt Marine Terminal in Baltimore, where they will be offloaded by shore-based handling gear, the Coast Guard said.

After the containers are removed, tugboats and pull barges will make another attempt to refloat the vessel.

The Coast Guard says it has maintained a 500-yard safety zone around the ship that will continue throughout the operation for the safety of the salvage operation and to protect the marine environment.

But Chesapeake Bay watermen who make their living crabbing, fishing, and harvesting oysters in those waters are worried the dredging has destroyed marine habitat in the area and beyond as silt travels and settles in other areas.

Merchant Marine Captain Robert Newberry, chairman of the Delmarva Fisheries Association, told The Epoch Times the ship is stuck on the “oyster bottom” referring to the oysters’ habitat which will need to be restored when this is over.

Evergreen Marine Corp. is based in Taipei City, Taiwan. It owns more than 150 container ships. The Ever Forward’s homeport in Hong Kong.