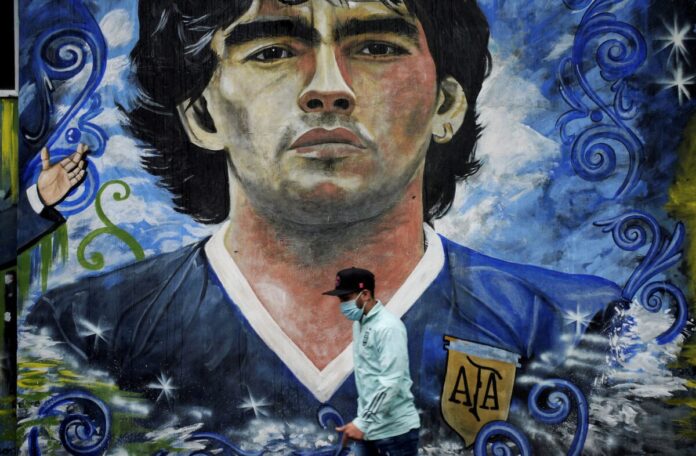 BUENOS AIRES—The shirt worn by Diego Maradona when he scored two of the most famous goals in footballing history was put up for auction by Sotheby’s, with the iconic jersey expected to sell for at least four million pounds ($5.23 million).

Maradona wore the No. 10 shirt in the 1986 World Cup quarter-final against England in Mexico. Six minutes into the second half he put Argentina ahead by sneakily punching the ball into the net, a goal made famous as the “Hand of God”.

Just four minutes later he dribbled from his own half to score a sublime second that regularly tops polls as the greatest goal in World Cup history.

England midfielder Steve Hodge got Maradona’s jersey after the game and announced on Wednesday he was putting it up for auction after 19 years on display at England’s National Football Museum.

However, the sale was complicated by claims from Maradona’s family that the wrong shirt is going under the hammer, with his daughter and ex-wife casting doubt on the veracity of the piece by saying Hodge got the shirt Maradona wore in the first half.

“It’s not the shirt my dad wore in the second half,” Dalma Maradona said on Metro radio.

“I know for sure that he doesn’t have it, and I know who does,” she added. “I don’t want to say who has it because it’s mad.”

Sotheby’s said they used photomatching technology to “conclusively” match the shirt to both goals by “examining unique details on various elements of the item, including the patch, stripes, and numbering.”

But Maradona’s ex-wife Claudia Villafane stated it was “the word of that ex-player against ours” and said Hodge did not need to sell the historic garment.

“I don’t think he needs the money, unless he is auctioning it for a good cause,” she told Clarin newspaper. “It would be good if the Argentine Football Association bought it.”

Reuters has no way of independently verifying the family’s claims.

Sotheby’s also pointed to Maradona’s words from his autobiography ‘Touched by God’ where he talked about handing the shirt he was wearing at the end of the match to Hodge.

The company also said the shirt had been in the National Football Museum for nearly two decades and there had never been a claim that it was not the one Maradona wore while scoring the goals.

Since he died of a cardiac arrest in November 2020 Maradona’s family has been involved in a series of scandals and court battles related to his legacy.

The 60-year-old former Napoli and Boca Juniors striker is widely regarded as one of the greatest footballers of all time and is a hero to millions of people around the world, and particularly in Argentina.

The online auction runs between April 20 and May 4.