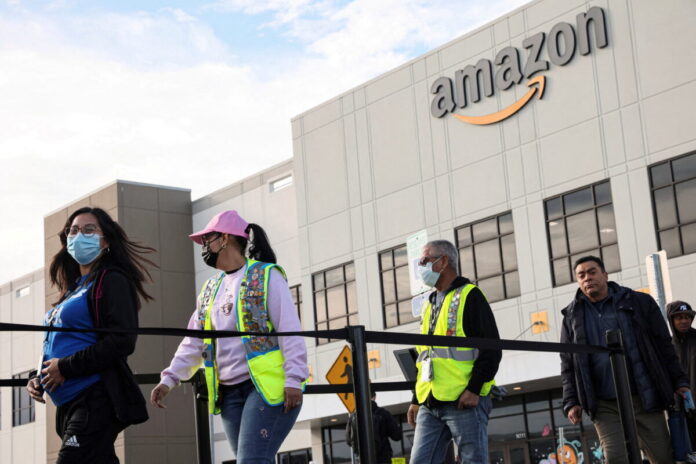 Amazon.com Inc. has said it objects to a union victory at its JFK8 warehouse in the New York City borough of Staten Island on April 2, accusing the new union, Amazon Labor Union (ALU), of having threatened workers into voting.

The U.S. National Labor Relations Board (NLRB) said in an April 6 filing that it is giving Amazon until April 22 to provide further evidence to support its objections to the election.

Amazon said it had requested extra time to “further compile, review and outline evidence to support, among others, its objections that: petitioner threatened employees to coerce them into voting yes” and that “petitioner electioneered and interfered with employees waiting in line to vote.”

The tech giant also claims that “voter turnout was significantly depressed by the manner in which the region conducted the first polling period, and all subsequent polling periods, which resulted in long waits,” and that agents of the Amazon Labor Union (ALU) had “loitered or gave the impression of being present, in the immediate vicinity of the polling area intimidating voters and would-be voter.”

Amazon further alleges that voters were threatened, while some immigrant workers were allegedly warned that they would have their benefits taken away from them if they did not vote to unionize.

Additionally, Amazon cited objectionable conduct by the region before and during the polling which it said interfered with employees’ free choice.

Workers at JFK8, Amazon’s warehouse located in Staten Island, voted to be represented by the ALU on April 2, 2022, marking the first time an Amazon warehouse has been represented by a union in the United States.

Approximately 2,654 workers voted in favor of unionization and 2,131 voted against. The process began in March 2020 due to concerns that the company was not taking sufficient safety precautions during the initial COVID-19 outbreak.

However, the push to unionize has steadily progressed and has seen workers also cite the need for higher wages and improved working conditions.

Amazon said in a statement after the vote that it was “disappointed with the outcome of the election” and indicated that it was considering filing objections with the NLRB, which accused Amazon of illegally interfering with organizing efforts by threatening, surveilling, and interrogating employees in the lead up to the union vote.

Amazon has denied those allegations.

Labor watchdog NLRB in March 2022 asked a judge to issue an injunction forcing Amazon to give an employee his job back after he was allegedly fired in retaliation for protesting unsafe working conditions.

Since the recent union vote result, workers from another 50 Amazon sites have contacted the union, the group’s leader has said.

Eric Milner, an attorney from the Simon & Milner law firm representing the ALU, said Amazon’s claims were false and “absurd” and that they would be overruled.

The Epoch Times has contacted Amazon and the Amazon Labor Union for comment.

Separately, on April 7, the Retail, Wholesale and Department Store Union (RWDSU) filed an objection with the NLRB over a union vote in Bessemer, Alabama, where Amazon workers voted against unionizing.

The RWDSU asked the labor relations board to set aside the results of that union election, citing alleged intimidation of employees who were pro-union as reasoning for the objection.

Amazon spokesperson Kelly Nantel said, “We want our employees’ voices to be heard, and we hope the NLRB counts every valid vote.”