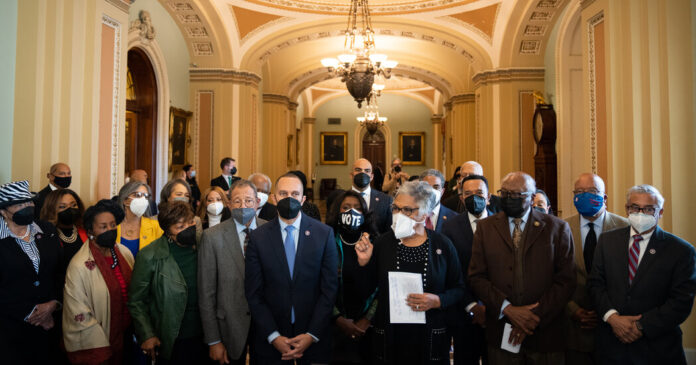 Dozens of members of the Congressional Black Caucus gathered in the Capitol’s Rayburn Room on Wednesday to pose for a photo, many of them holding T-shirts that read “Black Women Are Supreme.”

The caucus, which began more than 50 years ago, was celebrating the vote to confirm Judge Ketanji Brown Jackson to the Supreme Court.

“It says to us, there’s hope that other Black women and minorities will be able to follow in her footsteps,” said Representative Joyce Beatty, Democrat of Ohio and the chairwoman of the caucus. “She’s breaking, shattering, tearing down those glass ceilings.”

Long the core of Black political power in Washington, the caucus has been shaped by civil rights leaders. Today, it counts 56 members of Congress and two delegates as members. They represent 27 states, as well as Washington and the U.S. Virgin Islands.

While every member of the caucus is a Democrat, the caucus’s diversity in background, age and ideology were on full display at the gathering on Wednesday. There was Representative Maxine Waters, Democrat of California, the most senior member of Congress who is Black, alongside younger members, like Representative Ilhan Omar, Democrat of Minnesota.

Despite differences within the caucus on some issues, its members have banded together in support of Judge Jackson.

Others came to Judge Jackson’s defense during her confirmation hearings, during which Republicans fired off an array of political attacks.

In a powerful moment last month near the end of the hearings, Senator Cory Booker, Democrat of New Jersey and the only Black lawmaker on the Senate Judiciary Committee, moved Judge Jackson to tears as he reminded her of the significance of her bid to sit on the Supreme Court.

“You are my star. You are my harbinger of hope,” he said. “I’m not going to let my joy be stolen because I know, you and I? We appreciate something that we get that a lot of my colleagues don’t.”

Ms. Beatty said that Judge Jackson’s composed response to questions from Republicans showed that she had the “judicial temperament” needed to sit on the bench.

“I just think she brings great value, culture, a background that is so unique and so stellar,” Ms. Beatty said, noting Judge Jackson’s work as a public defender. “Someone who’s been confirmed three times for some of the highest courts that you can serve on, having the experience of clerking for Judge Breyer whose very seat that she’s filling — that within itself should give America comfort that she’s walking in the shoes of someone who has performed well.”