House Votes to Find Scavino and Navarro in Contempt in Jan. 6 Inquiry 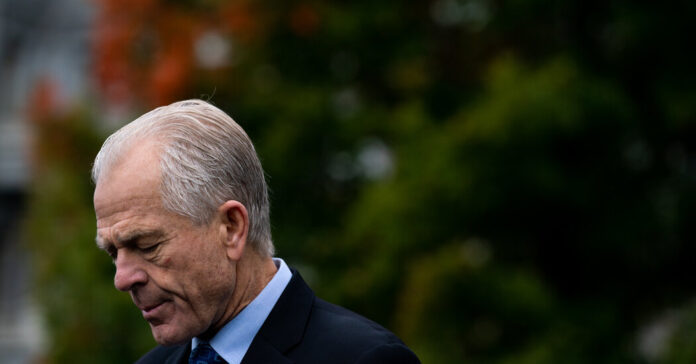 WASHINGTON — The House on Wednesday voted to recommend criminal contempt of Congress charges against Peter Navarro and Dan Scavino Jr., two close allies of former President Donald J. Trump, after the pair defied subpoenas from the special committee investigating the Jan. 6, 2021, attack on the Capitol.

The mostly party-line vote of 220 to 203 referred contempt charges to the Justice Department, calling for prosecutions of Mr. Navarro, a former top White House adviser, and Mr. Scavino Jr., a former deputy chief of staff. It came as congressional investigators have grown increasingly frustrated with some of Mr. Trump’s staunchest supporters who have refused to meet with the panel or turn over a single page of evidence to the committee as it digs into the worst assault on the Capitol since the War of 1812.

“We have two people who are flagrantly, brazenly defying the authority of the House of Representatives of the United States,” said Representative Jamie Raskin, Democrat of Maryland and a member of the committee. He said the men had “nothing but excuses for their noncompliance — excuses you would not accept from a teenage child.”

Only two Republicans, Representatives Liz Cheney of Wyoming and Adam Kinzinger of Illinois, both members of the investigative committee, voted for the charges. The rest of their party refused to support the move.

Dozens of Republicans lined up on the floor of the House on Wednesday to demand a change of topic, trying to force a vote on immigration legislation in line with their efforts to use problems at the border as a political weapon against Democrats ahead of midterm congressional elections.

After that failed, Representative Kevin McCarthy, Republican of California and the minority leader, attacked the investigation in a floor speech as a “political show trial” and accused the panel of bullying the men and trampling on their civil rights.

“Let me be clear: The riot on Jan. 6 was wrong. But make no mistake: the Democrats’ response is also wrong,” Mr. McCarthy said, adding, “Democrats are using the power of the federal government to jail their political opponents.”

Mr. Raskin shot back that Republicans were using “circus antics” to try to slow down the vote with a “conga line” of lawmakers queued up on the floor while they skipped out on their committee assignments.

He accused the Republicans of “slavishly” following Mr. Trump like “sycophants,” instead of joining efforts to investigate the deadly attack on the Capitol that left more than 150 police officers injured.

A contempt of Congress charge carries a penalty of up to a year in jail and a maximum fine of $100,000. The House vote steered the matter to the Justice Department, which now must decide whether to charge the two men.

Representative Jim Banks, Republican of Indiana, said the stakes of potential jail time were too high, and noted the vote would mean that four Trump White House aides would face criminal referrals from the committee.

Ms. Cheney called the vote “sad” and “tragic,” but said the committee was left with no other choice after some in her own party had abandoned the truth for fealty to Mr. Trump.

“So many in my own party are refusing to address the constitutional crisis and the challenge we face,” she said.

The Jan. 6 committee laid out its arguments against Mr. Navarro and Mr. Scavino in a 34-page report that detailed how closely they were involved in efforts to keep Mr. Trump in power even after he lost decisively at the polls.

Mr. Navarro and Mr. Scavino are among a handful of Mr. Trump’s closest allies who have refused to sit for interviews or turn over documents, even as more than 800 witnesses — including other top White House officials — have complied with the committee’s requests.

In the past week, the panel has interviewed both Ivanka Trump, the president’s eldest daughter, and her husband Jared Kushner, both of whom were high-ranking White House advisers to Mr. Trump. Each sat for lengthy interviews with the committee. Neither asserted executive privilege to avoid answering the committee’s questions.

Representative Bennie Thompson, Democrat of Mississippi and the chairman of the committee, contrasted their approach to the hard-line stance adopted by Mr. Scavino and Mr. Navarro.

The committee said Mr. Navarro had worked with Stephen K. Bannon, another Trump ally, to carry out a plan to delay Congress’s certification of the election on Jan. 6, 2021, and ultimately to try to change the election’s outcome. Mr. Navarro has previously described this plan as the “Green Bay Sweep” and has said more than 100 members of Congress had signed on to it.

Mr. Navarro also wrote a report alleging a stolen election, which was widely shared with others working to overturn the election. Mr. Navarro claimed that Mr. Trump “himself had distributed Volume 1 of the report to every member of the House and Senate” before Jan. 6.

In his latest statement, Mr. Navarro denied he had anything to do with the violence, but continued to insist the 2020 election was rigged, while promoting his book, “In Trump Time.”

“A truly bipartisan committee would investigate why Nancy Pelosi, the Capitol Hill Police, and the Pentagon left the perimeter of the Capitol building inadequately guarded and whether FBI informants played any significant role in instigating violence and chaos that was, as I noted in ‘In Trump Time,’ the last outcome Donald Trump and I wanted on Jan. 6,” he said. “We needed peace and calm that day for the legal Green Bay Sweep to run and thereby get an accurate accounting of all legal votes.”

Ivanka Trump testifies. The former president’s daughter, who served as one of his senior advisers, testified for about eight hours before the Jan. 6 House committee. On the day of the riot, Ms. Trump was in the West Wing. She is said to have tried to persuade her father to call off the rioters.

Justice Department widens inquiry. Federal prosecutors are said to have substantially widened their Jan. 6 investigation to examine the possible culpability of a broad range of pro-Trump figures involved in efforts to overturn the election. The investigation was initially focused on the rioters who had entered the Capitol.

Investigating Trump’s actions. Evidence gathered by the Justice Department and House panel show how Mr.  Trump’s “Be there, will be wild!” tweet incited far-right militants ahead of Jan. 6, while call logs reveal how personally involved Mr. Trump was in his attempt to stay in office before and during the attack.

As for Mr. Scavino, the committee said he had worked with Mr. Trump to spread false information via social media regarding election fraud and had recruited a crowd to Washington on Jan. 6.

The committee said it had “reason to believe” Mr. Scavino, whose subpoena was served at Mar-a-Lago, the former president’s property in Palm Beach, Fla., was with Mr. Trump on Jan. 5 and Jan. 6 in 2021 when plans were discussed to “challenge, disrupt, or impede the official congressional proceedings.” He also was with Mr. Trump while people trapped inside the Capitol were urgently calling on the president to halt the violence.

The committee also said it “has reason to believe that Mr. Scavino may have had advance warning about the potential for violence on Jan. 6,” because he was known to monitor pro-Trump websites where plans to commit violence were discussed.

The committee has sought Mr. Scavino’s testimony since September, when it issued him a subpoena. The panel said it delayed Mr. Scavino’s deposition six times to try to accommodate him.

Mr. Scavino sued Verizon in January — at first, anonymously — seeking to stop the company from turning over his phone records to the committee.

His lawyers have argued that President Biden — who waived executive privilege for both men — does not have the authority to do so over the testimony of a former president’s senior aides.

So far, Mr. Bannon is the only target of the committee who has been indicted on contempt of Congress charges for refusing to comply with a subpoena.

Mr. Bannon, whose trial is tentatively set for July, was dealt a legal blow on Wednesday when a judge ruled he could not defend himself by claiming he was merely following the advice of his lawyers when he declined to respond to the committee’s subpoena.

In December, the House recommended that Mark Meadows, Mr. Trump’s final White House chief of staff, face criminal contempt of Congress charges for his refusal to sit for an interview with the committee. The Justice Department has not yet decided whether to pursue criminal charges against Mr. Meadows, who turned over thousands of documents to the committee before he stopped cooperating.

The committee also initially sought a contempt charge against Jeffrey Clark, a former Justice Department lawyer who participated in Mr. Trump’s frenzied attempts to overturn the election. But before it forwarded a contempt recommendation to the full House, Mr. Clark’s lawyer let the panel know he would sit for another interview in which he repeatedly invoked his Fifth Amendment right against self-incrimination. That effectively ended the potential contempt charge against him.