The Hitch in Australia’s Grand Plans With India – The Diplomat 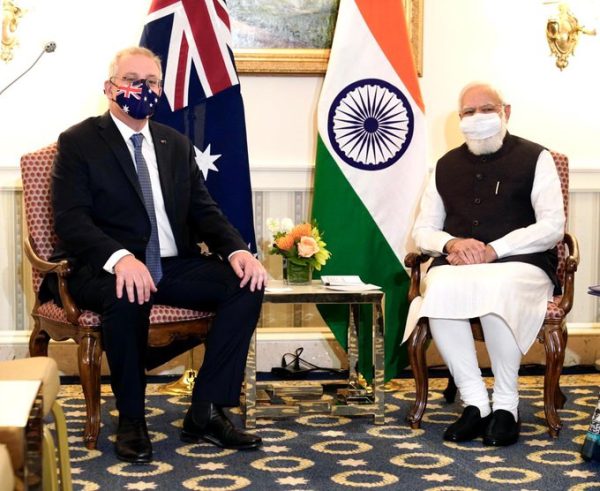 A landmark new trade deal. Deepening security ties. Expanding political cooperation. And, perhaps most compellingly, a common source of strategic anxiety in the form of China. For Australia, the momentum behind its bilateral relationship with India feels unstoppable. It’s the smart strategic gambit: courting access to Indian markets and greater security alignment, just as Australia’s exports are shut out of China and Beijing hardens its stance against Canberra.

While there’s much cause for optimism, and indeed celebration, about deepening ties with India, Australia should pay just as much attention to the difficult parts of this bilateral relationship.

Chief among them is human rights. There are serious and ongoing concerns about human rights in India, including the situation in Kashmir, treatment of religious minorities, and the crackdown on civil and political rights. But the Australian government’s recent public statements on India fail to comment on such points. You need to go back to 2014 to find a reference to “human rights” in any joint documents between Australia and India, despite a recent flurry of new agreements.

The irresistible conclusion is that the Australian government has taken the pragmatic view that, with much to gain strategically and economically with India, it should avoid seemingly unnecessary points of disagreement. Of course, this would hardly be the first time a country has muted its principles for the sake of its interests. But in this case, it may be a miscalculation.

Australia espouses strong support for human rights. And, in fairness, it has historically been a force for good in advancing these norms. But if a rhetorical commitment to the “indivisibility, universality and inalienability of individual rights” is to be matched with substantive action, then Australia is found wanting with respect to India.

This matters not just because of the universality principle. It also undermines Australia’s prosecution of human rights issues with China and its broader strategy of handling a difficult relationship with Beijing. While Canberra is right to call out repression in Xinjiang and Hong Kong, among other issues, its failure to comment about India plays into Beijing’s hands, suggesting that Australia’s advocacy is strategic rather than genuine concern.

In terms of Australia and India ties, however, silence on human rights in this growth phase of the relationship could undermine its long-term success. By avoiding the topic now, Australia sets a difficult precedent, making it harder to speak and act in the future without causing major, even irreparable, damage to the bilateral relationship. The longer human rights issues persist in India, the harder it will be for Australia not to voice its concerns – and Canberra may well find itself isolated for not doing so. Moreover, an India beset by internal divisions and growing marginalization of democracy makes for a less reliable partner.

What Australia needs to do, as soon as possible, is to embed open dialogue on human rights as a normal, even expected, part of its relationship with India. Canberra should have confidence that the groundwork already established with New Delhi, plus India’s own compelling interests in working with Australia, mean that the relationship can endure some tension. While a different situation, India-U.S. ties have thrived in spite of stinging criticism from the State Department. Australia needs to develop tolerance for short-term friction in order to build a more sustainable dynamic in its relationship with India.

Australian diplomats often quietly support human rights initiatives at a local level in sensitive contexts. It is very likely that this is happening in India, including through the Direct Aid Program, and should continue. But a more open, public dialogue is needed to demonstrate principled consistency. While it should be carefully calibrated, there are several options Australia could pursue.

Practical cooperation in areas with human rights implications is a good start. Existing work on issues like trafficking in persons, governance, and anti-corruption should include explicit human rights dialogues. Growing ties in cyber and technology are an opportunity to raise concerns around civil and political rights, especially given mutual commitments to openness and freedom in cyberspace.

Working through quasi-governmental bodies that include official and civil society representation is another option, allowing high-profile attention at arm’s length from government. The new Centre for Australia-India Relations could, for instance, run a 1.5-track dialogue on human rights. And if Australia can approach dialogue in a self-reflective way acknowledging its own shortcomings on issues like Indigenous disadvantage, then Canberra can make its human rights advocacy more about learning than lecturing.

India’s historic strategic aloofness has made Australia reluctant to raise human rights for fear of jeopardizing the bigger project of drawing New Delhi into security alignment. But the best and most durable relationships are those where all issues, good and bad, can be aired. With the Australia-India relationship going from strength to strength, now is precisely the moment to make human rights a regular feature.