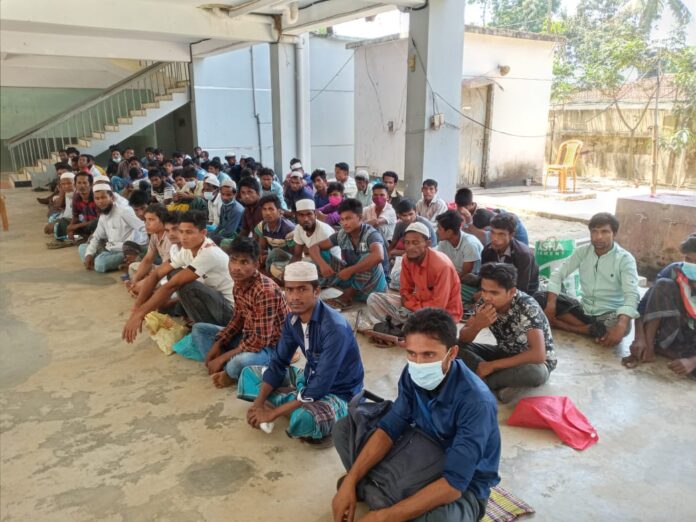 Bangladesh authorities were holding more than 300 Rohingya in transit camps after police caught them working outside their refugee camps in Cox’s Bazar, or while leaving their shelters for other purposes, officials said Tuesday.

Human Rights Watch meanwhile renewed its call for the government to ease movement restrictions on Rohingya, saying that barring refugees from leaving the camps for work or shutting down their shops within the camps only compounds their misery.

During raids in the Ukhia sub-district of Cox’s Bazar on Monday and Tuesday, police arrested 216 Rohingya refuges who had left the camps or were in the process of leaving them to go outside, Ahmed Sanjur Morhsed, officer-in-charge of the Ukhia police station, told BenarNews, an RFA-affiliated online news service.

“Acting on a tip off, we conducted raids on Monday and Tuesday at different bazaars and detained Rohingya. We caught many Rohingya while they were heading out for various places [outside the refugee camps],” he said, adding that the operation was a “special drive.”

He claimed that those arrested had admitted that they worked locally outside their refugee camps. After detaining them, police sent them to transit camps run by the United Nations High Commissioner for Refugees (UNHCR).

Police in neighboring Teknaf, another sub-district of Cox’s Bazar, similarly arrested more than 100 Rohingya during the special drive on Monday and Tuesday.

“The target of the special raids is to stop the Rohingya from getting out of the camps and to bar them from working in the local market,” Md. Hafizur Rahman, the officer-in-charge of the Teknaf sub-district police station, told BenarNews.

All those Rohingya detained have been sent to the UNHCR transit camps ahead of their return to their respective refugee camps, he said.

Separately, Ukhia police also arrested 48 Rohingya who were preparing to be trafficked to Malaysia illegally, by sea.

Nur Amin, a resident of Kutupalong camp, was one of the Rohingya refugees rounded up by police on Tuesday from a bazar in Ukhia.

“We were warned not to go out for work. I was passing my time idle,” Amin said.

UNHCR has yet to confirm that the arrested Rohingya were handed over to the transit camp.

“This is sort of incident would put stress on the Rohingya refugees. So the issue should be dealt with humanely,” Ziaur Karim, a Rohingya leader at Kutupalong camp, told BenarNews.

“The local Bangladeshi workers have been losing their job opportunities while the Rohingya people have been offering menial work with cheap wages,” M. Gafur Uddin, chairman of Palongkhali union council, told BenarNews.

Meanwhile, in a statement issued Monday, Human Rights Watch pointed to how Bangladeshi authorities, in recent months, had intensified their restrictions on Rohingya refugees’ livelihoods, movement, and education.

“Bangladesh is understandably burdened with hosting nearly one million Rohingya refugees, but cutting them off from opportunities to work and study is only compounding their vulnerability and dependence on aid,” said Meenakshi Ganguly, South Asia director at Human Rights Watch.

“The Bangladesh government should formalize and expand employment opportunities to bolster the Rohingya’s self-reliance and enable them to support their families and communities.”

Local humanitarian groups are aware of the issues raised by New York-based HRW.

Nur Khan Liton, a human rights activist, told BenarNews: “I don’t think there’s an easy solution to many of these issues until Bangladesh officially recognizes these Rohingya as refugees.”