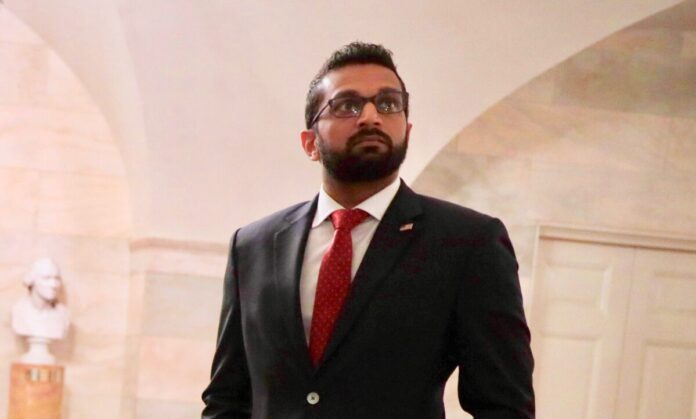 Patel made the remarks in an episode of EpochTV’s “Kash’s Corner” after Durham late Monday published potentially conclusive evidence in the case against Sussmann.

The filing showed alleged text messages the cybersecurity lawyer sent to the FBI general counsel that he wasn’t working for any client when he provided information to the bureau.

Sussmann, was charged last year with lying to the FBI’s then-general counsel James “Jim” Baker in late 2016 about his client when he pushed claims that there was a secret link between the Trump Organization and a Russian bank, which the FBI later said was not credible. He worked with the high-powered Washington-based law firm Perkins Coie—which was retained by the Clinton campaign and Democratic National Committee during the 2016 campaign.

The text message Sussmann allegedly wrote to Baker, according to a late-night court filing (pdf) by Durham, read: “Jim—it’s Michael Sussmann. I have something time-sensitive (and sensitive) I need to discuss. Do you have availibilty [sic] for a short meeting tomorrow? I’m coming on my own—not on behalf of a client or company— want to help the Bureau. Thanks.”

Baker replied “Ok. I will find a time. What might work for you?” Sussmann then responded, “Any time but lunchtime—you name it.”

Sussmann’s lawyers previously denied that their client made such claims to Baker, saying it was made orally. However, Durham’s latest filing suggests that Sussmann may have put it in writing.

Patel said the evidence has left Sussmann’s defense “in shambles.”

“I think largely because of some strategic blunders, but mostly because Michael Sussmann lied, and should be convicted of this crime,” he said.

Patel said that based on his experience as a former public defender, one of the hardest things to defend against are statements made by your clients, “because you can’t run away from them.”

“You have to own them, and you have to craft a defense around them,” he explained. “The hardest thing to do is when you have written statements, recorded statements that your client gave at two different periods of time that are contradictory. And that’s what you have here.”

Patel outlined what steps he would take if he were a federal prosecutor in the case.

“I would just take the transcript where he was deposed under oath and said X, and I [would] hand it to the jury. Then I would take the recorded statements from the FBI general counsel and their agents, where he said ‘why’ on the exact same subject—two totally opposite statements that were recorded,” said Patel.

“You can just hand the jury the pieces of paper and say, this is what he said. He lied. What’s the defense gonna say? ‘Well, he was just joking to Congress, the FBI’s notes are inaccurate, the FBI’s recordings of these conversations are wrong, multiple agents got it wrong. The general counsel for the FBI came in and testified during this trial and lied,’” Patel explained.

Sussmann has pleaded not guilty and said he committed no wrongdoing. His lawyers recently called on a federal judge to dismiss the case, arguing that Durham’s probe is politically motivated.

The Epoch Times has contacted Sussmann’s lawyers for comment.