Eric Greitens Tests the Limits of the Trump Scandal-Survival Playbook 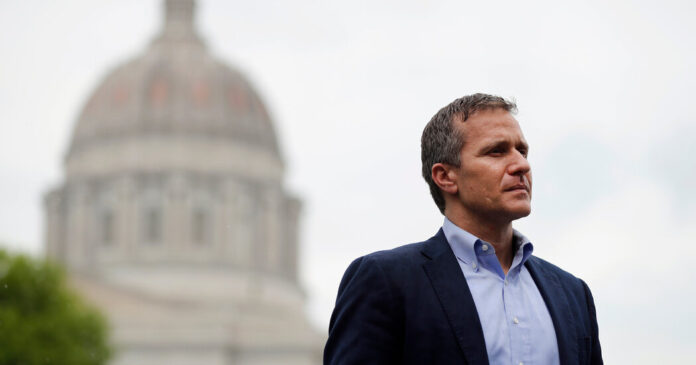 There are some signs that Greitens’s support is softening. The latest public poll of the primary, by the Trafalgar Group, showed Greitens falling into second place among likely primary voters for the first time. Another recent survey commissioned by Schmitt’s campaign showed similar results. And on Saturday, in what some saw as evidence of his growing difficulties, Greitens skipped a Republican Party event in Taney County, one of the bigger annual gatherings of activists in the state.

The turmoil in the Republican primary has complicated Donald Trump’s efforts to influence the outcome. Some party insiders had feared that Trump would endorse Greitens, who has tailored his campaign message around “defending President Trump’s ‘America First’ policies” and has questioned the 2020 presidential election results.

After the previous round of allegations by Sheena Greitens, Trump issued a statement praising “the big, loud and proud personality of Congressman Billy Long,” who is also running for the Missouri Senate seat but has failed to gain much traction. “This is not an Endorsement, but I’m just askin’?” Trump said.

Eric Greitens has struggled to raise money, with finance reports showing that his campaign had less than $300,000 in the bank as of January. Super PACs supporting Greitens have received large donations from two Republican billionaires, Richard Uihlein, a shipping magnate, and Bernard Marcus, a founder of Home Depot. Greitens has also brought in nearly $900,000 through his joint fund-raising committee, and a spokesman said his upcoming fund-raising report would show that the campaign had raised a “six-figure” sum of money since Sheena Greitens made her first statement.

But James Harris, a Republican lobbyist who has been talking with Missouri donors and activists about the race, said, “They’re really just done with him.” Harris recounted a conversation with a donor who recently turned down a fund-raising pitch by Greitens, saying his wife would “kill me” if he gave money to the former governor.

And now, the entry into the race of an heiress to a beer-company fortune threatens to make the general election competitive.

Democrats’ dilemma: The heiress or the veteran?

Republicans are warily eyeing the newly announced campaign of Trudy Busch Valentine, who is the daughter of August Busch Jr., the Anheuser-Busch beer baron who died in 1989.