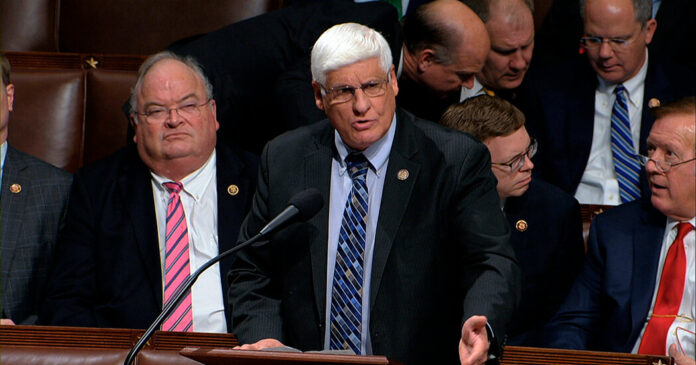 Representative Bob Gibbs of Ohio announced on Wednesday that he would not seek re-election, just as early voting got underway in the state. Ohio’s redistricting process had forced Mr. Gibbs, who has served in Congress since 2011, into a Republican primary against a Trump-backed challenger, Max Miller, among others.

Mr. Gibbs said in a statement that the tumultuous effort to redraw the state’s congressional map had become a “circus,” and he criticized the last-minute changes to his rural district south of Cleveland.

“It is irresponsible to effectively confirm the congressional map for this election cycle seven days before voting begins, especially in the Seventh Congressional District where almost 90 percent of the electorate is new and nearly two thirds is an area primary from another district, foreign to any expectations or connection to the current Seventh District,” he said.

Mr. Gibbs was facing a serious primary challenge from Mr. Miller, an aide to former President Donald J. Trump. Mr. Trump endorsed Mr. Miller last year when the Ohio candidate was aiming to unseat Representative Anthony Gonzalez, who had voted to impeach Mr. Trump. But Mr. Gonzalez said in September that he would not run for re-election.

Mr. Gibbs and Mr. Gonzalez were later drawn into the new Seventh District. Mr. Gibbs voted against impeaching Mr. Trump after the Capitol riot and voted to overturn the results of the presidential election, positions that the former president has treated as litmus tests for which Republicans he will support in 2022.

Mr. Miller, who has called for term limits for members of Congress and has vowed to “drain the swamp” in Washington, on Wednesday praised Mr. Gibbs’s tenure.

Ohio is losing one of its 16 congressional seats as part of the once-a-decade redistricting process after the latest census. The state’s efforts to redraw its district lines have been mired in legal challenges.

In January, the Ohio Supreme Court rejected a congressional map drawn by the state’s Republican-dominated Redistricting Commission, calling it too partisan for a state where the G.O.P. has lately won about 55 percent of the statewide popular vote.

The redistricting process is a potentially decisive factor in determining which party will control Congress. Both parties have sought to give themselves advantages in states across the country.

Maryland’s Republican governor on Tuesday signed a map drawn by Democrats after a judge there threw out an earlier map she said was an “extreme gerrymander.” There has been legal wrangling over congressional maps in several states, including New York, Alabama and North Carolina.