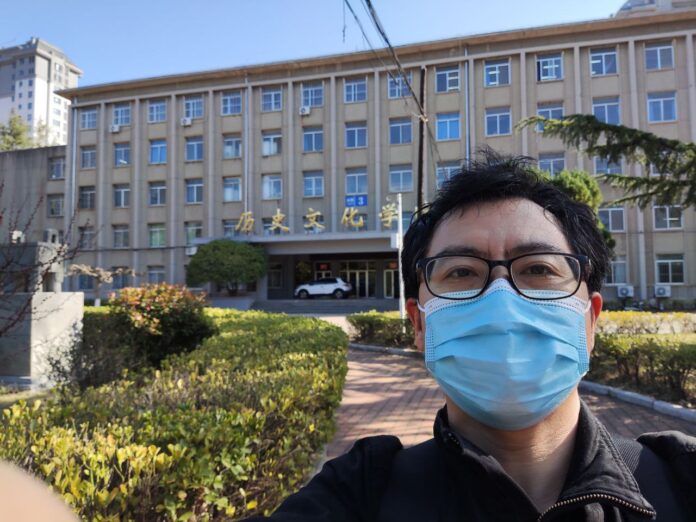 Authorities in the eastern Chinese province of Shandong have expelled a student from Yantai’s Ludong University after he protested the government’s COVID-19 policies, which have led to strict lockdowns in major cities across China in recent weeks.

Postgraduate student Sun Jian, 38, was expelled after he held up a placard on campus on March 27 that read “resolutely oppose the campus lockdown,” among other slogans, he told RFA on Tuesday.

He said he was approached and obstructed several times by university personnel during the 20 minutes he displayed the sign.

“I was stopped by a teacher about three minutes after I left the postgraduate apartment building,” he said. “A while later, two security guards from the university came and followed me in an electric vehicle.”

“One of them asked me for my personal details, and also advised me not to raise the placard,” Sun said. “Another teacher recorded me on their phone.”

Sun’s walk took him from the postgraduate dorm to Ruzi Lake in the northern sector of the Ludong University campus.

“Another teacher came along and tried to dissuade me, and also asked for my personal details,” he said. “Later, I heard someone say they were going to snatch the placard away from me and I started running at the that point, and they chased me.”

“Soon after that, a teacher came up and tackled me from behind and I fell to the ground … they snatched my phone,” he said. “Two security guards and a teacher escorted me to the concierge at the No. 1 administrative building.”

Sun also continued to post video and commentary about his protest to social media, even after he was detained by the university authorities.

Sun was expelled from the university on the grounds that he had “openly opposed and resisted campus regulations, and seriously disrupted public order on campus.”

Sun had earlier complained in a letter to the school authorities that he felt he had been sent to a detention center rather than a university, owing to the COVID-19 restrictions imposed there.

“The students at Ludong have become highly dependent on daily express deliveries for their day-to-day existence,” he told RFA. “Online shopping is now an indispensable part of their lives, but the school banned it across the board.”

“This has been very troublesome and hugely damaging,” Sun said. “I have been at the school since 2020, for more than 18 months now, and there were also lockdowns back then, even where there were no COVID-19 cases.”

“They had to go to restaurants to buy food and eat it back in the dorms, because they weren’t allowed to eat in restaurants, and the prices on campus were so high,” he said.

“The libraries were all shut down, so we couldn’t study there, so all of that was very troublesome for the students.”

He said that foreign students and the family members of teachers were allowed to come and go freely, but Chinese students were banned from leaving campus.

“Excessive disease control measures have sowed panic among students; I think the PCR testing of all staff was unnecessary and also caused huge disruption to students studies, and their daily lives,” Sun said.

“I feel that my behavior fell purely within the scope of freedom of speech,” he said. “I did abide by the disease control regulations that I didn’t agree with.”

“I expected that Ludong University would punish me or expel me. I expected these consequences, but I couldn’t predict the specific outcome,” he said.

“I feel that people should carry on speaking out, always speak up,” Sun told RFA, adding that he plans to file an official complaint against the university.