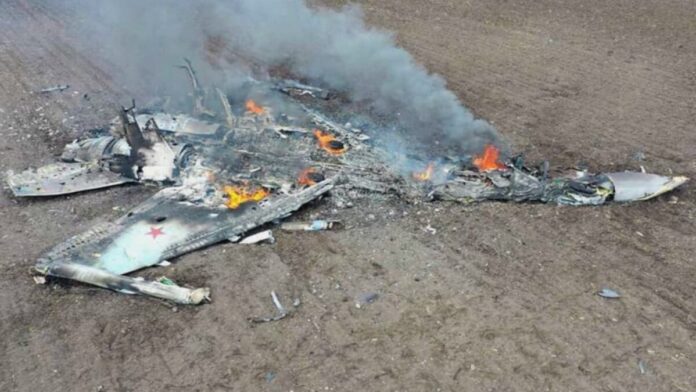 The footage was published on social media by the General Staff of the Armed Forces of Ukraine on April 3, showing a fiery object plummeting from the sky.

“Anti-aircraft missiles of the Air Force of the Armed Forces of Ukraine shot down another Russian Su-34 fighter-bomber in Kharkiv region,” military staff wrote in the description of the video.

Separately, armed forces also published pictures of the Russian warplane that was brought down by its air defenses, showing the aircraft burning in a large open field. The Epoch Times couldn’t immediately verify the photos or footage.

The Sukhoi Su-34, Russia’s newest fighter jet, is a twin-engine, twin-seat, supersonic fighter-bomber that costs $36 million per unit. It was designed to replace the Soviet-era Sukhoi Su-24. Moscow started manufacturing the aircraft about a decade ago.

In another video uploaded by the country’s armed forces on April 5, Ukrainian paratroopers are seen firing an anti-aircraft missile from a Stugna-P, an anti-tank weapon system designed and manufactured in Ukraine, at a Russian attack helicopter flying in the Kharkiv region.

The Russian Air Force Kamov Ka-52 “Alligator” attack helicopter was shot down on Tuesday by Ukraine’s Zhytomyr paratroopers using the advanced Stugna-P. The anti-tank weapon system has a range of 3.6 miles and can penetrate armor up to 43 inches in thickness.

“This is the second case when Zhytomyr paratroopers use anti-tank weapons to destroy enemy air targets,” military staff wrote in the description of the video.

Kharkiv has been one of the cities where Russia has concentrated much of its firepower and the area is still partially surrounded by Russian forces.