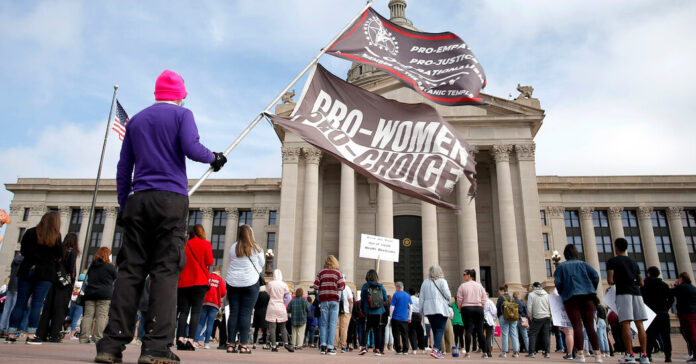 Lawmakers in Oklahoma on Tuesday approved a near-total ban on abortion, making it the latest Republican-led state to forge ahead with stringent abortion legislation as the Supreme Court weighs a case that could overturn Roe v. Wade later this year.

The measure, Senate Bill 612, would make performing an abortion “except to save the life of a pregnant woman in a medical emergency” a felony punishable by up to 10 years in prison.

The Oklahoma House voted 70 to 14 to send the bill, which passed the Senate last year, to Gov. Kevin Stitt, a Republican who promised in September to sign “every piece of pro-life legislation” that came to his desk.

Its passage came after Oklahoma became a major destination for women from Texas who were seeking abortions after that state enacted a law banning the procedure after about six weeks, a very early stage of pregnancy.

“If allowed to take effect, S.B. 612 would be devastating for both Oklahomans and Texans who continue to seek care in Oklahoma,” said Tamya Cox-Touré, executive director of the A.C.L.U. of Oklahoma.

“Nearly half of the patients Oklahoma providers are currently seeing are medical refugees from Texas,” Ms. Cox-Touré said in a statement. “Now, Oklahomans could face a future where they would have no place left in their state to go to seek this basic health care.”

This is a developing story.