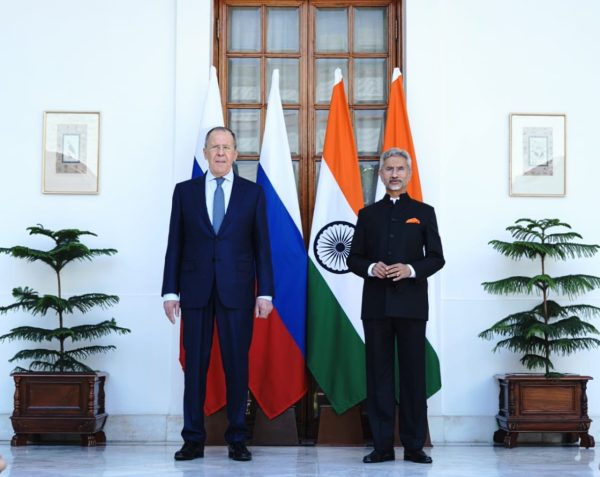 The meetings often became awkward and acrimonious, especially when Western dignitaries were involved. During the meeting with Truss, in response to criticism over India’s decision to buy more Russian oil, India’s Minister for External Affairs Jaishankar suggested that there is a “campaign” afoot against India.

Later, Daleep Singh told a small group of journalists that there will be “consequences” if India attempted to circumvent sanctions on Russia. That became a particularly important message, given that Lavrov was heading to New Delhi only a day later to discuss ways to boost rupee-ruble trade between India and Russia in response to sanctions on Moscow.

The frenetic parleying put India’s foreign policy in a tight spot. Comments from Washington are increasingly making it clear that India’s ties with the U.S. will suffer if New Delhi keeps its strategic ties with Russia. In recent years, India has been collaborating with America on a host of capacity-building issues, including jointly developing defense technology, improving India’s role in the global supply chain, and helping New Delhi find a seat in the world’s decision-making councils.

Even though analysts in New Delhi dismiss concerns that any of these initiatives will be hurt by the standoff over Ukraine, the West’s treatment of Russia as an existential threat will inevitably have consequences, as Singh warned. And the possibility of India-U.S. ties suffering will only increase as the war drags on.

Yet, on the other hand, if New Delhi now walks back its outreach towards Moscow, it will be seen as acting under U.S. pressure.

Ultimately, over the last week, India appeared to tilt ever closer towards Russia, even if only subtly. Jaishankar kept up his tough rhetoric to stonewall the West. But more tellingly, of all those who visited Delhi over the past two weeks, Lavrov was the only one granted a coveted meeting with Prime Minister Narendra Modi himself.

Context matters. When Wang Yi had requested a similar meeting during his last-minute visit to New Delhi only days ago, India had rebuffed him by citing continued tensions at the border. Whether intentionally or otherwise, India’s message was therefore that it did not consider Russia’s invasion of Ukraine to be as serious as China’s incursions in the Himalayas.

Modi’s decision to meet Lavrov was a far cry from India’s stated policy of non-alignment and it could have broader implications as the war drags on in Ukraine. Most significantly, by standing up to unprecedented pressure from Washington, New Delhi might succeed in dissuading China from perpetrating further aggression on the border.

For years, Beijing has been wary of India’s rise as an American ally in the Indo-Pacific. It has routinely decried the Quad, which it sees as a containment mechanism aimed at China’s rise. Seen in that context, Beijing’s routine transgressions on the border with India are in part strategic — attempting to keep India tied up in the Himalayas and less able to play a more proactive regional and global role.

But if Beijing sees India as an unwilling member of the Western liberal order, it may well sense an opportunity for a reset with New Delhi. Indeed, when Wang Yi visited New Delhi last week, there were some indications that Beijing wants India and China to coordinate their roles in multilateral affairs. Ahead of his own visit, Lavrov said that Russia and China were building a “new world order,” and while in New Delhi, he situated efforts to establish trade in the Indian and Russian currencies as part of Moscow’s overall efforts to reduce the hegemony of the U.S. dollar.

For Modi, none of this is as unpalatable as Washington might hope it is. Indeed, on many critical issues, India now agrees more with Russia and China than it does with the U.S. — whether it is on the need for multipolarity or on the quest to reduce American hegemony within global financial systems. On matters such as human rights, climate change and religious freedom, the Modi government already finds itself on the same page as Moscow and Beijing, as Indian defense analyst Sushant Singh recently pointed out.

By rolling out the red carpet for the Russian foreign minister this week — despite a blatant and unprovoked violation of Ukraine’s sovereignty and freedom — India has already made a strong statement about where it stands in the battle to shape the world.