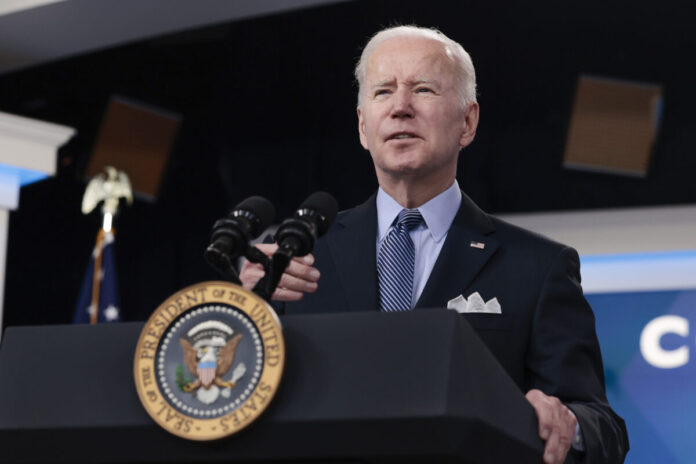 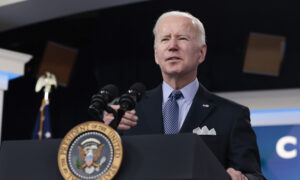 President Biden on Thursday made two big admissions about the U.S.-led economic sanctions on Russia. The first is that the sanctions will lead to food shortages for many countries other than Russia and that this is simply the price that Americans ought to be forced to pay.

The second admission was that sanctions haven’t worked to change Moscow’s policies, and that “sanctions never deter” the targeted regime from carrying out aggression.

So, Biden has helpfully now explained not only that sanctions haven’t actually deterred Moscow, but that the people of the United States ought to pay more for food in order to maintain sanctions that don’t work.

These admissions come after repeated claims from the White House and Biden supporters claiming that sanctions would deter Russia from carrying out or sustaining an invasion of Ukraine.

Moreover, the White House has repeatedly downplayed the effect that sanctions would have on the cost of living for American households. (The fact that sanctions may have a devastating effect on poor countries is, of course, ignored.)

So, Biden has now made it clear: sanctions don’t work, and they’ll make you poorer. But we must keep them in place anyway.

What Exactly Did Biden Say About Cost of Sanctions?

After attending a meeting of G7 and NATO leaders on Thursday, Biden said food shortages “are going to be real.” He then added, “The price of these sanctions is not just imposed upon Russia, it’s imposed upon an awful lot of countries as well including European countries and our country as well.”

Of course, these “costs” extend beyond food into energy prices and the prices of many other goods as well. Oil prices remain near a ten-year high.

It is notable that Biden admits the sanctions themselves are a key factor in the coming shortages. On the other hand, it has been common practice for supporters of sanctions to claim that it is only the Russian invasion that has curtailed food availability. Yes, the invasion naturally lowered food production in Ukraine, but it’s clear the U.S.-led sanctions will diminish food availability for dozens of African countries, many of which are heavily dependent on Russian grain.

Fortunately for Americans, North America is a food exporting region, and the U.S. itself is a net food exporter, even in spite of the fact that Americans consume more calories than any other country. In other words, Americans are a long way from subsistence levels when it comes to their diets. Obesity, not malnutrition, is the order of the day in America. But the American cost of living will nonetheless be negatively affected. We should expect food prices to increase beyond even what we might have expected due to the central bank’s inflationary policy which drove overall price increases—pre-Ukraine War—up to nearly eight percent.

This is because even though Americans are food exporters, the sanctions will further drive up global prices of food commodities while ensuring that many of our trading partners must devote more of their resources to acquiring food. That means lowered productivity and investment for trading partners in the goods that Americans buy. In turn, that means lowered supply and rising prices for American consumers.

If Sanctions Don’t Work, Why Bother?

Biden’s admission that sanctions “never deter” contradicts weeks of claims by White House officials who have insisted that sanctions would force Russia out of Ukraine. For example, Kamala Harris claimed “the deterrence effect of these sanctions is still a meaningful one” and Deputy National Security adviser Daleep Singh said “Sanctions are not an end to themselves. They serve a higher purpose. And that purpose is to deter and prevent.”

Moreover, in February, national security adviser Jake Sullivan said, “The president believes that sanctions are intended to deter…. [a]nd in order for them to work—to deter, they have to be set up in a way where if Putin moves, then the costs are imposed.”

The fact that the White House has been forced to change its story has highlighted in a short period of time how the sanctions have already failed to achieve their goals. In an effort to explain away the failure, Biden then claimed in a rambling response that he never said sanctions deter anything:

Let’s get something straight. If you remember, if you have covered me from the beginning, I did not say that in fact the sanctions would deter him. Sanctions never deter. You keep talking about that…. Sanctions never deter. The maintenance of sanctions. The maintenance of sanctions. The increasing the pain, and that’s why I asked for this NATO meeting today, is to be sure after a month we will sustain what we’re doing not just month, the following month, but for the remainder of this entire year. That’s what will stop him.

So, the new party line is that sanctions didn’t deter Russia from anything, but they’ll someday cause enough pain to force Russia out of Ukraine. This is just more wishful thinking from the White House, and the abysmal success record of economic sanctions makes this clear.

As we noted at mises.org, sanctions have a terrible record of achieving the stated goals of forcing policy changes in targeted regimes. This is because targeted regimes tend to double down on sanctions rather than comply with sanctioning states. In other words, nationalism is more powerful than the economic hardship imposed on the targeted states. A second barrier to success is this: if the United States wants to impose truly effective sanctions, it will need to get nearly universal cooperation from other states. Without that sort of cooperation, other states will provide multiple lifelines to the targeted regime.

In the case of Russia, we’ve already seen this in spades. Germany has refused to cut off Russian energy exports. Mexican legislators from the ruling party are forging a new “Mexico-Russia friendship” caucus. India is now in the process of working out a new rupee-ruble trade arrangement to get around U.S. sanctions. China, of course, says it will do what it wants.

This all follows the usual script of economic sanctions and helps illustrate why they fail. What is remarkable is that the White House has been so quickly forced to admit both that sanctions have failed to achieve the clearly stated goal of deterrence, and that the White House thinks it’s fine to shrug and say, “Hey, food shortages are just the price you little people gotta pay!” Given the impotence of sanctions, and the damage being done to third parties, it’s time to admit the reality and move on.

If Washington really wanted to end the bloodshed—instead of actively discouraging peace as it is now doing—it would be aggressively pursuing a negotiated settlement and ceasefire.