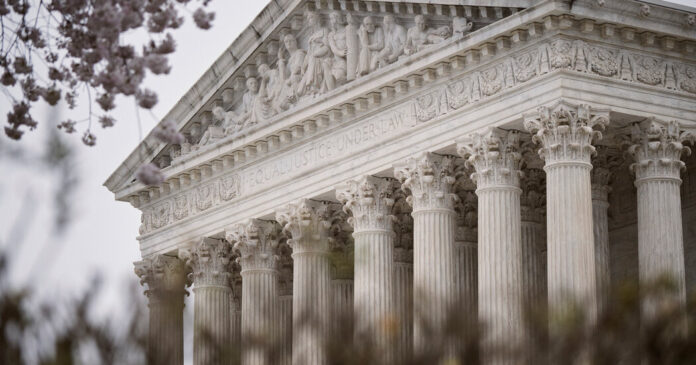 WASHINGTON — The Supreme Court ruled on Monday in favor of a Brooklyn man who said he had been falsely accused by police officers of resisting arrest, saying he could sue for malicious prosecution under a federal civil rights law.

The vote was 6 to 3, with the majority deciding only the narrow question of what the man, Larry Thompson, had to show to meet a requirement that there was a favorable termination of the prosecution against him. Justice Brett M. Kavanaugh, writing for the majority, said it was enough that prosecutors had dropped the charges, rejecting the view that Mr. Thompson had to demonstrate that there had been some affirmative indication of his innocence.

The case started in 2014, as Mr. Thompson, a Navy veteran and longtime postal worker, was living with his fiancée, their newborn baby girl and Mr. Thompson’s sister-in-law who, Justice Kavanaugh wrote, “apparently suffered from a mental illness.”

When the baby was a week old, the sister-in-law called 911 and accused Mr. Thompson of sexually abusing the infant, citing a red rash on her buttocks that turned out to be diaper rash. When four police officers arrived, Mr. Thompson refused to let them in without a warrant.

They entered anyway, tackling Mr. Thompson and pinning him to the floor. The officers handcuffed and arrested him. While he was in jail for two days, one officer filed a criminal complaint charging Mr. Thompson with resisting arrest. Prosecutors eventually dropped the charges.

Mr. Thompson sued the officers under an 1871 federal civil rights law known as Section 1983 that allows citizens to sue state officials, including police officers, over violations of constitutional rights. He said the officers had violated the Fourth Amendment, which prohibits unreasonable seizures.

Lower courts dismissed his malicious prosecution claim, saying that a precedent of the federal appeals court in New York required him to show “that the underlying criminal proceeding ended in a manner that affirmatively indicates his innocence.”

Even as he ruled against Mr. Thompson in 2019, however, Judge Jack B. Weinstein of the Federal District Court in Brooklyn said the precedent “can and should be changed.” Judge Weinstein died last year.

Justice Kavanaugh wrote that malicious prosecution law in 1871 generally did not require more than dismissal of charges to overcome the requirement of a favorable termination.

“Requiring the plaintiff to show that his prosecution ended with an affirmative indication of innocence would paradoxically foreclose” a Section 1983 claim, he wrote, “when the government’s case was weaker and dismissed without explanation before trial, but allow a claim when the government’s evidence was substantial enough to proceed to trial.”

The ruling was narrow and incremental, and Justice Kavanaugh noted that it left police officers with other ways to defeat “unwarranted civil suits,” notably including qualified immunity, the doctrine that requires plaintiffs to show not only that the officer had violated a constitutional right but also that the right had been “clearly established” in a previous ruling.

In dissent, Justice Samuel A. Alito Jr. wrote that the majority had failed to demonstrate the federal law allowed malicious prosecution claims at all, saying that Justice Kavanaugh had stitched together “elements taken from two very different claims: a Fourth Amendment unreasonable seizure claim and a common-law malicious-prosecution claim.”

“In fact,” he wrote, “the Fourth Amendment and malicious prosecution have almost nothing in common.”