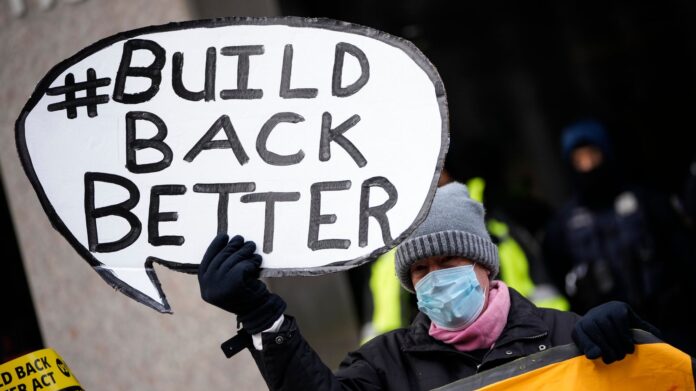 A progressive climate group is looking to thrust Russia’s war and its impact on the global energy market to the center of any revived talks on President Joe Biden’s “Build Back Better” plan, lobbying for the inclusion of more than a dozen investments to boost clean energy and reduce U.S. reliance on oil and gas.

After killing the original version of the massive climate and social spending package last year, Sen. Joe Manchin (D-W.Va.) recently signaled his willingness to come to the table on a pared-down version, as long as it specifically focuses on climate change, prescription drug prices and cutting the federal deficit. The $1.7 trillion reconciliation package that House Democrats passed in November included approximately $555 billion in total climate spending.

In a memo shared with HuffPost and set to be distributed to officials on Capitol Hill and in the White House, climate advocacy group Evergreen Action outlined 15 specific climate investments that were part of the House-approved bill that it hopes to see prioritized in any resurrected version. The group says those provisions would go a long way toward speeding up the transition to renewable energies and breaking free of a global oil and gas market that is empowering Russian President Vladimir Putin and other bad actors.

“We want to connect the dots here, to galvanize more support for Congress to take the action that they need to actually solve this problem,” Lena Moffitt, the group’s chief of staff, told HuffPost. “The war in Ukraine is a terrible humanitarian tragedy that is unfolding and has captured everyone’s attention, and is also spotlighting one more reason why we need to get off of fossil fuels.”

“It just so happens that Congress is considering a bill that would supercharge our ability to do so,” Moffitt added.

While Evergreen Action supports the full suite of climate provisions in the now-stalled Build Back Better Act, its memo spotlights those that would have the most immediate impact on reducing U.S. demand for oil and gas. They include tax credits on everything from electric vehicles and solar panel manufacturing to energy efficient buildings and green hydrogen production; huge investments to decarbonize the industrial, building and manufacturing sectors and electrify the fleet of federal vehicles; and $29 billion for a Greenhouse Gas Reduction Fund to jump-start the deployment of clean energy infrastructure.

The memo cites a recent survey from think tank Data for Progress that found over two-thirds of all likely voters support federal investments to advance clean energy in light of Russia’s invasion of Ukraine. It also cites a study from policy firm Energy Innovation that concluded the climate provisions in Biden’s Build Back Better would reduce U.S. oil consumption enough by 2027 to offset the amount of Russian oil imported into the U.S. last year.

Last month, Evergreen took aim at Senate Majority Leader Chuck Schumer (D-N.Y.), releasing a video demanding that he deliver on his promise to “forcefully, insistently and urgently” address climate change via a climate spending bill. The group doubled down on that pressure in Monday’s memo, writing, “President Biden and Majority Leader Schumer must get a deal done, and get the climate provisions of the House-passed reconciliation bill through now.”

Dozens of House Democrats sent Biden a letter in mid-March calling on him to restart reconciliation negotiations, with climate as his primary goal. Reconciliation is a special budget process that only requires 51 votes to make it through the Senate.

Biden has faced enormous pressure from both sides of the aisle in recent weeks. Republicans are demanding that he “unleash” U.S. oil and gas production to combat rising energy costs and help European allies reduce reliance on Russian oil, while Democrats are largely calling on him to move even more quickly toward renewable sources of energy.

Last week, Biden ordered a massive release from the nation’s strategic oil reserves — up to 1 million barrels per day for the next six months — to provide relief from high gas prices, but stressed that the ongoing crisis highlights the urgent need for the kind of climate and clean energy investments in his stalled plan.

“Ultimately, we and the whole world need to reduce our dependence on fossil fuels altogether,” Biden said. “We need to choose long-term security over energy and climate vulnerability. We need to double down on our commitment to clean energy and tackling the climate crisis with our partners and allies around the world.”

“We need to embrace all the tools and technologies that could help us free us from our dependence on fossil fuels.”