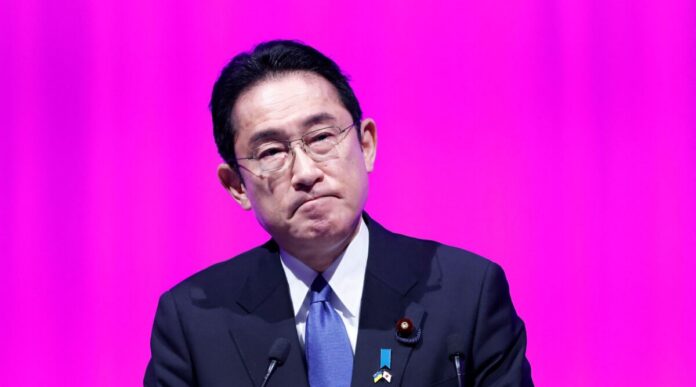 The latest on the Russia–Ukraine crisis, April 4. Click here for updates from April 3.

Japanese Prime Minister Fumio Kishida told reporters Monday that he strongly condemned the reported attacks on civilians in Ukrainian towns on the outskirts of Kyiv “as violation to international law.”

European leaders have already condemned the reported attacks, responding to images of bodies in the streets, including some with their hands tied behind their backs.

Kishida said “Japan will firmly carry out what it should do” while cooperating with the international society in possible further sanctions against Russia.

Japan has imposed a series of sanctions against Russia in line with the United States and other Western nations.

The Ukrainian military says that its forces have retaken some towns in the Chernihiv region and that humanitarian aid is being delivered.

The news agency RBK Ukraina says the road between Chernihiv and the capital of Kyiv is to reopen to some traffic later Monday.

Chernihiv is a city 80 miles north of Kyiv and it had been cut off from shipments of food and other supplies for weeks. The mayor said Sunday that relentless Russian shelling had destroyed 70% of the city.

Russian forces also withdrew from the Sumy region, in Ukraine’s northeast, local administrator Dmitry Zhivitsky said in a video message carried by Ukrainian news agencies Sunday. The troops had occupied the area for nearly a month.

In other areas recently retaken from Russian troops, Ukrainian officials say they have recovered hundreds of slain civilians in the past few days. Ukraine’s prosecutor-general says the bodies of 410 civilians have been recovered from Kyiv-area towns.

Ukrainian President Volodymyr Zelenskyy has appeared in a video at the Grammy Awards asking for support in telling the story of Ukraine’s invasion by Russia.

During the message that aired on the show Sunday night, he likened the attack to a deadly silence threatening to extinguish the dreams and lives of the Ukrainian people, including children.

Zelenskyy told the audience: “Fill the silence with your music. Fill it today to tell our story. Tell the truth about the war on your social networks, on TV, support us in any way you can any, but not silence. And then peace will come to all our cities.”

Following Zelenskyy’s message, John Legend performed his song “Free” with Ukrainian musicians Siuzanna Iglidan and Mika Newton and poet Lyuba Yakimchuk as images from the war were shown on screens behind them.

Ukraine’s prosecutor-general says the bodies of 410 civilians have been removed from Kyiv-area towns that were recently retaken from Russian troops.

Iryna Venediktova says on Facebook that the bodies were recovered Friday, Saturday, and Sunday. She says 140 of them have undergone examination by prosecutors and other specialists.

Ukrainian Deputy Prime Minister Iryna Vereshchuk says the mayor of the village of Motyzhyn in the Kyiv region was murdered while being held by Russian forces. Vereshchuk adds that there are 11 mayors and community heads in Russian captivity across Ukraine.

Russia’s Defense Ministry has rejected the claims of atrocities against civilians in Bucha and other suburbs of Kyiv.