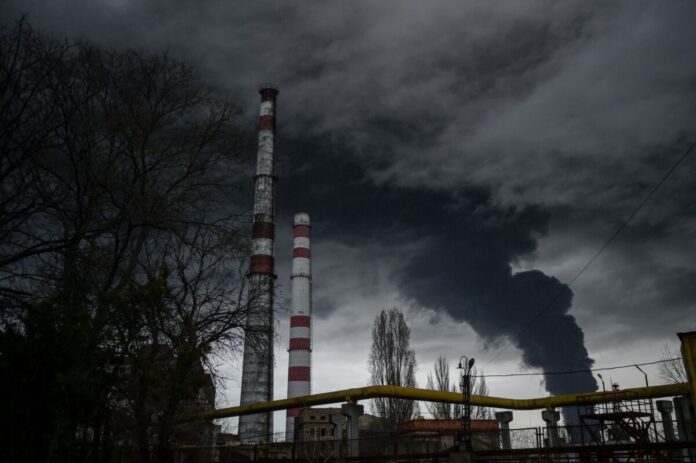 The latest on the Russia–Ukraine crisis, April 3. Click here for updates from April 2.

The Russian military says it has struck an oil processing plant and fuel depots around the strategic Black Sea port of Odesa.

Russian Defense Ministry spokesman Maj.-Gen. Igor Konashenkov said Russian ships and aircraft fired missiles on Sunday to strike the facilities, which he said were used to provide fuel to Ukrainian troops near Mykolaiv.

The Russian Defense Ministry also shared footage of what it said was attack helicopters Ka-52 of the Russian Aerospace Forces claiming to destroy camouflaged positions of the Armed Forces of Ukraine.

The Kremlin says that by imposing sanctions on Russian President Vladimir Putin the West has demonstrated it has abandoned its sense of reason.

Kremlin spokesman Dmitry Peskov said in televised remarks Sunday that the sanctions against Putin were going “beyond the edge of reason,” adding that they showed that the West is “capable of any stupidities.”

Peskov added that Putin’s meeting with Ukrainian President Volodymyr Zelenskyy is “hypothetically possible” once negotiators from the two countries prepared a draft agreement to be discussed.

Lithuanian film director Mantas Kvedaravicius was killed on Saturday in Ukraine’s Mariupol, a city whose fate he had documented for many years, according to the Ukrainian Defense Ministry’s information agency and a colleague.

The Epoch Times could not immediately verify the report.

“We lost a creator well known in Lithuania and in the whole world, who until the very last moment, in spite of danger, worked in Russia-occupied Ukraine,” Lithuanian President Gitanas Nauseda said on Sunday.

Kvedaravicius, who was to turn 46 this year, was best known for his conflict-zone documentary “Mariupolis,” which premiered at the 2016 Berlin International Film Festival.

The film paints a portrait of Mariupol, a strategic port is in the breakaway region of Donetsk where pro-Russian fighters have been fighting Ukrainian forces since 2014.

The European Union on Sunday accused Russian troops of committing atrocities in the Kyiv region after the mayor of the town of Bucha said 300 residents had been killed during a month-long occupation by Russian forces.

Ukraine said on Saturday its forces had retaken all areas around Kyiv, claiming complete control of the capital region for the first time since Russia launched its invasion on Feb. 24. The mayor of Bucha, a liberated town 37 kilometers (23 miles) northwest of the capital, said 300 residents had been killed by the Russian army.