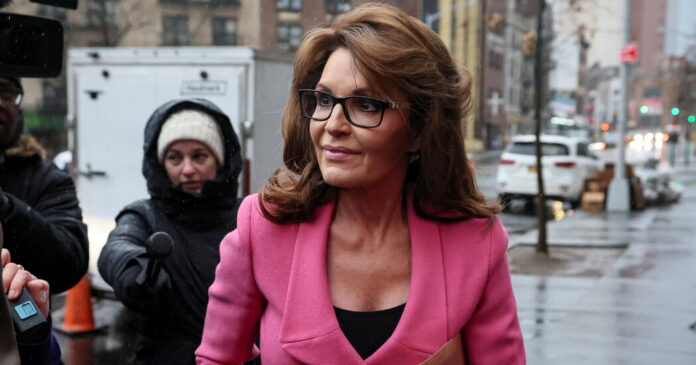 Ms. Palin claimed that The Times defamed her when it published a 2017 editorial erroneously linking her political rhetoric to a mass shooting. A jury threw out the suit, a day after the federal judge in the case indicated he would dismiss the claims if the jury ruled in her favor because her legal team had failed to meet the high legal standards for public figures who claim defamation. The Times, which acknowledged and corrected the error in question soon after it was published, has not lost a libel case in an American courtroom in at least 50 years.

Mr. Young, 88, who was the longest-serving Republican in Congress and who was first elected in 1973, died on March 18. The scramble among potential candidates to fill his unexpired term started almost immediately. Friday was the deadline to file official paperwork, and the Alaska Division of Elections had received submissions from 37 candidates by Friday afternoon.

Ms. Palin will face a host of both far-right and establishment Republican rivals, including Nick Begich III, the Republican scion of Alaskan political royalty; State Senator Joshua Revak, an Iraq war veteran who previously worked for Mr. Young; and Tara Sweeney, who served in the Trump administration as assistant secretary of the interior for Indian affairs.

“She certainly has a constituency,” Art Hackney, a consultant on Mr. Revak’s campaign, said of Ms. Palin, adding that “whoever wants to file” will have to “bring it on” to defeat Mr. Revak.

Ms. Palin will also have some formidable challengers from the progressive left, including Al Gross, a former orthopedic surgeon who ran unsuccessfully for Senate in 2020, and Christopher Constant, an openly gay Democrat who is a member of the Anchorage Assembly.

Ms. Palin, who became one of only three women ever on a major party’s presidential ticket, has since tended to stay out of the national glare. But she roused concern in New York in January when she dined outdoors days after testing positive for the coronavirus.

She had passed several times before on running for higher office, including in 2012, when several of the activists who would help Mr. Trump get elected tried to convince her to run against former President Barack Obama.