Weatherman Interrupts Live Broadcast To Warn His Kids About Tornado 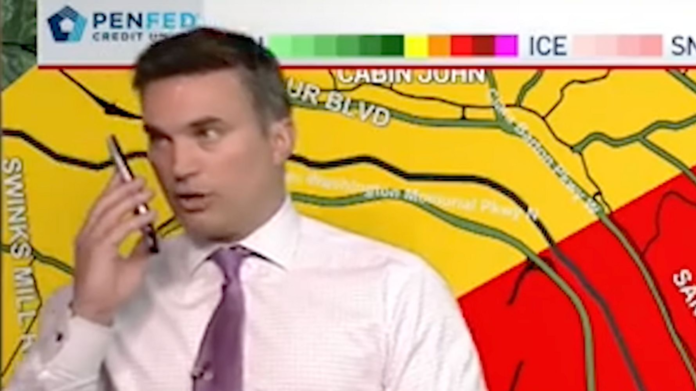 Reporting the weather was a really personal experience for one Washington, D.C. meteorologist on Thursday.

Doug Kammerer of NBC Washington was doing a live broadcast about a tornado warning when he suddenly realized his own home was in harm’s way.

Knowing his kids were home alone, Kammerer temporarily switched into dad mode and called home while he was still in the middle of his live broadcast, according to RawStory.

“Kent, you there, buddy?” Kammerer said on his cellphone while on air. “Hey man, I want you to get down to the basement. We got a tornado warning. I want to make sure you and Callie get down as soon as you can.”

Kammerer also told his kids, “Get in the bedroom down there and wait 10-15 minutes, OK. Do it now.”

After the call, Kammerer told his colleagues and viewers he had a good reason to interrupt the live broadcast and call home.

“I gotta warn my kids, because I know what my kids are doing right now, they’re probably online gaming. And they’re not seeing this,” he explained.

Although Kammerer’s call was unorthodox, he got support from fellow meteorologist James Morrow, who works for at National Weather Service headquarters in Silver Spring, Maryland.

“The decision to cut in is not easy for stations to do, and for meteorologists to ask permission to do,” Morrow told NPR. “But as a consumer of their feed, and a scientists who understands the risks of strong tornadic storms like this, it was heartening to see this type of coverage for what could’ve turned into a very serious situation.”

Kammerer later admitted on Twitter that he found the situation a little nerve-wracking.

Yes, had to warn my family! Kids were home alone and I knew they were not watching me on TV! They are safe. Thank you! Scary moment for me though, I was freaking out inside a bit. https://t.co/To8mPxibBh