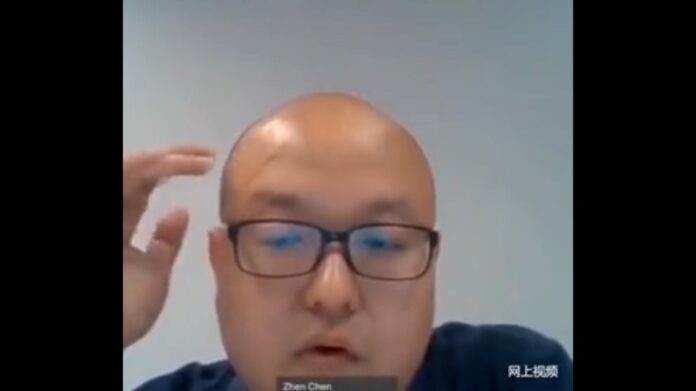 A university in Italy is investigating allegations of bullying by a Chinese lecturer following a classroom dispute about the status of Taiwan, local media reported.

Complaints were made after Politecnico di Milano architecture lecturer and Chinese national Chen Zhen admonished a student from the democratic island of Taiwan, which has never been ruled by the Chinese Communist Party (CCP) nor formed part of the People’s Republic of China, for failing to register as “Chinese.”

“I will talk something to Wang, but this is nothing related to the other two Iranian students, so I’m going to speak in Chinese with him, OK?” Chen is seen saying in English at the start of a video clip that he initially posted to his own account on the Chinese social media account WeChat.

The clip was later picked up by Australia-based asylum-seeker Wang Lebao and amplified on Twitter.

Chen continues in Chinese: “So, Wang, it’s not about your thesis. This has nothing to do with the other two students, so I’m going to say this in Chinese … I gave everyone a thesis template, asking them to fill out which city and which country they’re from. You wrote Taipei, Taiwan.”

“The first thing I want to say is, the whole European Union, including Italy, sees Taiwan as a part of China,” he said. “You should know that not a single EU government, nor many others, officially recognizes Taiwan as a country.”

“Your government may like to play word games to fool the people, but they’ve never amended the constitution,” he said.

Taiwan was part of Japanese territory for the first half of the 20th century, before being handed over the 1911 Republic of China under Chiang Kai-shek at the end of World War II. The islands of Taiwan, Penghu, Kinmen and Matsu are still governed as a sovereign state under its constitution.

Recent opinion polls have shown that the majority of its 23 million population don’t identify as Chinese, and have no wish to be governed by Beijing, which has threatened to annex Taiwan by military force to achieve its idea of “unification.”

Taiwan’s foreign affairs ministry condemned the treatment of Wang as “an abuse of power,” and said it had asked its representative office in Italy to follow up on the matter.

University rector Ferruccio Resta confirmed to the office that the university’s disciplinary committee has begun an investigation into the incident to determine whether Chen’s actions had violated the school’s code of ethics and conduct.

Lee Hsin-ying, Taiwan’s representative in Italy, told Taiwanese students in the country that what had happened was “very wrong,” and a bid to quash any sense of national identity among them.

Article 2 of the code requires the university to “prevent and combat all kinds of discrimination, both direct and indirect,” banning words, actions and procedures that discriminates against people based on gender, ethnic or national origin, sexual orientation, religion, personal or political views, abilities, social background or age,” the website said.

“The Polytechnic should consider it of primary importance not to allow the promotion of the Chinese Communist Party’s world view or propaganda in an Italian university,” the Today.it website said in the commentary article.

“Pending further developments, we ask ourselves: will this lecturer continue to teach at the university, and promote [CCP leader] Xi Jinping thought on socialism with Chinese characteristics in the new era?” the article said.

Italian politicians also hit out at the incident, saying it was “bullying.”

And far-right Brothers of Italy senator Lucio Malan accused Chen of trying to “re-educate” the Taiwanese student, saying he would demand an explanation from the relevant government minister.

Milan’s il Giornale newspaper also weighed in with an editorial on Monday noting that Taiwan still has formal diplomatic ties with the Vatican, and is for all practical purposes a sovereign state.

The row came after the 59th Bologna Children’s Book Fair succumbed to pressure from the Chinese government to change the country of origin of Taiwanese artist Pei-Hsin Cho to “Taiwan, China.”

Cho had been holding a solo exhibition at the book fair after winning an award there last year.

“The Chinese government has never ruled Taiwan for a day, and naturally has no right to claim to represent Taiwan in the international arena or to devalue the name of the country used by the people of Taiwan to participate in activities.”