Democratic Hopes and Anxiety Rise Over the Jan. 6 Panel 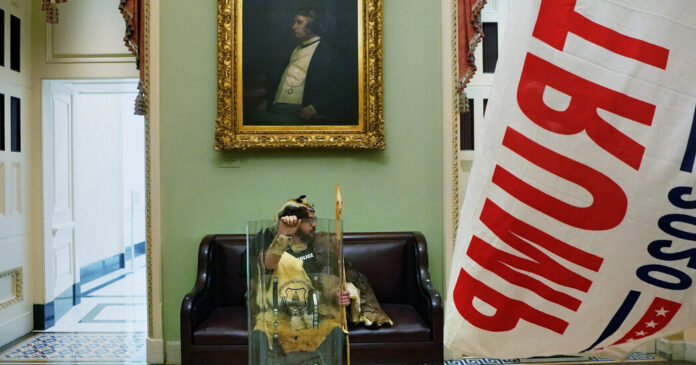 It’s one of the X factors that could, in theory, alter the contours of this year’s midterm elections: What does the Jan. 6 committee have in its pocket?

The bipartisan House investigation of the assault on the U.S. Capitol is “entering a critical stage,” as the panel’s vice chair, Representative Liz Cheney, Republican of Wyoming, put it this week — and it is kicking up a lot of dust along the way.

On Monday, the committee voted to recommend that two onetime aides to former President Donald Trump, Peter Navarro and Dan Scavino, be held in contempt of Congress for refusing to comply with congressional subpoenas. Also Monday, a federal judge wrote that it was “more likely than not” that Trump had broken the law by trying to disrupt a joint session of Congress and conspiring to defraud the United States.

Investigators have identified a nearly eight-hour gap in Trump’s call logs from Jan. 6 and are discussing whether to demand the former president’s mobile phone records. They’re also looking into whether a Trump tweet from December 2020, in which he invited his supporters to swarm Washington on Jan. 6, constituted incitement. Lawmakers on the panel are constantly weighing the value of trying to gather additional information against the danger that the former president and his allies will bog them down in time-consuming litigation.

The Justice Department’s own inquiries are proceeding in parallel, and a grand jury has convened in Washington to investigate the planning of the pre-riot rallies. But that work is shrouded in mystery, and pressure is growing on Attorney General Merrick Garland to produce results. Federal law enforcement officials have arrested more than 775 people suspected of involvement in the Capitol riot, but they have yet to charge any member of Trump’s inner circle with a crime.

As a political matter, Democrats hope the committee’s work will highlight what they say is the extremism of House Republicans, anchoring them to Trump. And though voters are currently preoccupied with inflation and the war in Ukraine, Democrats expect that a series of upcoming public hearings and reports about Jan. 6 will put Republicans’ anti-democratic behavior on display for the American people to judge.

“It’s going to be an enormous exclamation point on the fact that House Republicans are dangerous,” said Simon Rosenberg, the president of NDN, a center-left think tank.

Republican Party leaders counter that the panel is seeking to criminalize “legitimate political discourse,” and have censured its two Republican members for their involvement in the Jan. 6 inquiry. This week, a lobbyist close to Representative Kevin McCarthy, the minority leader, took the extraordinary step of hosting a fund-raising event for Cheney’s primary opponent, and more than 50 House Republicans attended the gathering.

But, ultimately, the Jan. 6 committee will be judged by whether Americans view its findings as authoritative, fair and comprehensible, said Garrett Graff, the author of a new history of the Watergate scandal. Recalling the disappointment many Democrats felt upon the unveiling of Robert Mueller’s spare, legalistic account of the dealings between Trump’s 2016 campaign and Russia, Graff said it was important for lawmakers to grab the public’s attention with a compelling narrative of the Jan. 6 events.

“Congress can assign moral blame and moral responsibility in a way that Mueller couldn’t and Garland can’t,” Graff said. “I think it’s possible that the Jan. 6 committee can surprise us.”

Where will the investigation go next?

To try to make some sense of it all, we spoke with Luke Broadwater, a congressional reporter for The Times who has been covering the investigation for months. Our conversation, edited lightly for length and clarity:

There’s been a constant dribble of news about the House investigation. Where would you say the inquiry stands? Is it in the final stages?

I would say it’s in the third quarter, to use a sports metaphor. The committee has interviewed 800 witnesses, which is a ton, but there are probably at least 100 more people they’d like to talk to and some witnesses they want to re-interview.

And the people they haven’t met with include some of the most important: Mike Pence, Trump’s personal lawyer Rudolph Giuliani and Ivanka Trump.

The committee is still shooting for public hearings in May, though I would not be surprised if those get pushed back again.

You wrote this week about the hourslong gap in the records of Trump’s phone calls on the day of Jan. 6. Why are investigators so interested in that?

The committee is highly interested in Trump’s activities the day of the Capitol riot, especially what he was doing for the 187 minutes during which he delayed making any statement to call off the violence. The committee has argued that his lack of action makes him culpable for the violence and sheds light into his mind-set.

But the call logs are blank for the duration of the riot, so that presents a challenge for investigators as they try to determine exactly whom Trump was talking to during that pivotal time.

This week, the panel heard from Jared Kushner, the former president’s son-in-law. What’s the holdup with the others you mentioned: Pence, Giuliani and Ivanka Trump?

Each case is different, but each witness has been engaged in negotiations with the committee. Two of Pence’s top aides have already testified, causing his team to argue, according to what I’m told, that they have supplied the committee with plenty of testimony that alleviates the need for the former vice president to appear.

Giuliani has made clear that he does not intend to provide information against Trump, but he is considering providing information about his dealings with members of Congress, according to a person familiar with the negotiations. Ivanka Trump is also negotiating. Each of these is a sensitive dance, in which the committee wants to get information out of the witness without threatening him or her in a way that could lead to a contempt of Congress charge but no information.

Our colleagues wrote that Attorney General Merrick Garland is under “growing political pressure” to move more aggressively with the Justice Department’s criminal inquiry. Is that a complaint you hear from House members, too?

Yes, constantly — particularly with regard to the criminal contempt of Congress referral against Mark Meadows, Trump’s final chief of staff. Representative Adam Schiff, Democrat of California, has encouraged Garland to move “with alacrity” against Meadows. And Representative Elaine Luria, Democrat of Virginia, made this statement this week: “Attorney General Garland, do your job so that we can do ours.”

That said, there are signs the Justice Department investigation has entered a new phase. A grand jury in Washington has recently issued subpoenas (one of which we were able to review) that seek information about people “classified as V.I.P. attendees” at Trump’s Jan. 6 rally and about members of the executive and legislative branches who were involved in the “planning or execution” of any attempt to delay the certification of the 2020 election.

Justice Department widens inquiry. Federal prosecutors are said to have substantially widened their Jan. 6 investigation to examine the possible culpability of a broad range of pro-Trump figures involved in efforts to overturn the election. The investigation was initially focused on the rioters who had entered the Capitol.

Investigating Trump’s actions. Evidence gathered by the Justice Department and House committee show how former President Donald J. Trump’s “Be there, will be wild!” tweet incited far-right militants ahead of Jan. 6, while call logs reveal how personally involved Mr. Trump was in his attempt to stay in office before and during the attack.

Judge says Trump likely committed crimes. In a court filing in a civil case, the Jan. 6 House committee laid out the crimes it believed Mr. Trump might have committed. The federal judge assigned to the case ruled that Mr. Trump most likely committed felonies in trying to overturn the 2020 election.

Virginia Thomas’s text messages. In the weeks before the Capitol riot, Virginia Thomas, the wife of Supreme Court Justice Clarence Thomas, sent several texts imploring Mark Meadows, President Trump’s chief of staff, to take steps to overturn the election. The Jan. 6 House committee is likely to seek an interview with Ms. Thomas, said those familiar with the matter.

You mentioned that the panel might hold public hearings as soon as May. What might those hearings look like, and what is the panel trying to accomplish?

The committee is cognizant that many voters have retrenched into partisan camps about Jan. 6. So it is trying to break through that barrier, to the extent that’s possible. I would expect hearings at peak TV viewing time, perhaps even prime time, that try to clearly lay out the case of how Trump and his allies sought to overturn the 2020 election.

I would expect that the public will hear from experts who can shoot down claims of widespread electoral fraud and from officials who can testify about their firsthand experiences as Trump or his allies tried to pressure them to go along with the plan.

Searching for grace on Capitol Hill

On Politics regularly features work by Times photographers. Here’s what Jason Andrew told us about capturing the image above:

Being a photographer on Capitol Hill can, at times, feel like you’re a hamster running in a wheel, photographing the same frames over and over again. Yet it’s this visual monotony that I love.

It forces me to be creative — to look outside the box while moving away from the scrum of photographers who jockey for the right position, sometimes appearing to crawl on top of one another, only to take the same frame as their colleagues. I find that the best frames are usually made when I’m away from the pack.

On Tuesday, Representative Don Young of Alaska, a Republican who died two weeks ago, was lying in state to honor his decades of service in Congress. As the House Sergeant at Arms and Capitol Police officers prepared for Young’s coffin to arrive, the officers stood still, in a style similar to the Capitol’s neo-Classical architecture.

When they all bowed their heads, I moved to the left of the other photographers so the people in my frame would appear in line with the columns, in their own layers, creating a visual separation from the people next to them. The photo is static and yet, for me, very interesting. It’s one I could not have captured had I remained in front of the steps.

Thanks for reading. We’ll see you on Monday.