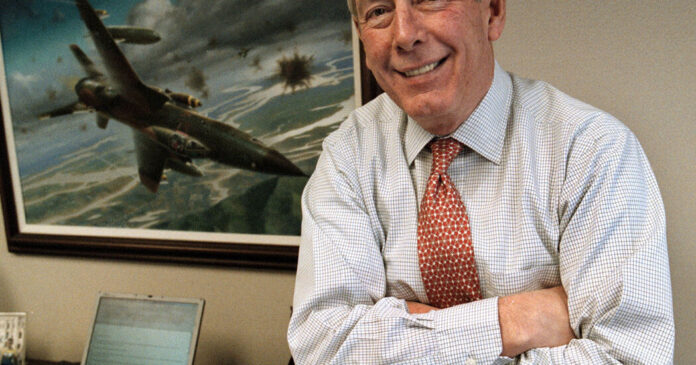 Still, the Air Force wanted to keep him and said it would send him to college. He chose the University of Kansas, where he majored in Latin American studies. He received his bachelor’s degree in 1975 and his master’s in 1976. He then rose through the Air Force ranks, serving at the Pentagon and in increasingly high-level posts around the world. He was made a four-star general in 1992.

After he retired from the Air Force, he was invited by Newt Gingrich, who had just engineered the first takeover of the House of Representatives by Republicans in 40 years and become speaker, to help him implement his strategic vision.

In 1998, Mr. Gingrich and President Bill Clinton created the Hart-Rudman commission to examine the nation’s security apparatus in a comprehensive way for the first time since 1947. General Boyd, the commission’s executive director, said in the oral history that had its report been taken seriously earlier in 2001, “we would have had at least an even chance of preventing the disaster that befell us on 9/11.”

He later became president and chief executive of Business Executives for National Security, a nonprofit organization through which top business leaders, including Jeff Bezos of Amazon, Fred Smith of FedEx and Hank Greenberg of AIG, offered their expertise to help improve efficiencies at the Pentagon and in homeland security.

In 2002, as President George W. Bush prepared to invade Iraq, General Boyd and Jessica Matthews, then president of the Carnegie Endowment for International Peace, a foreign policy research group in Washington, put forth an alternative to war. They proposed what they called coercive inspections, in which United Nations weapons inspectors in Iraq would be backed up by an American-led multinational inspections implementation force. These inspectors would demand compliance by Iraq “or else,” which could include pursuing a policy of regime change. The United States ultimately did invade Iraq, but their proposal was discussed at the highest levels in Washington.

Over the years, General Boyd tended to stay out of electoral politics, quietly backing Republicans. But in 2020 he signed a letter, along with nearly 500 other military and civilian leaders, saying he was supporting Joe Biden for president over President Donald J. Trump.

“Donald Trump’s assault on the rule of law that makes a democracy possible has been so egregious I’ve decided to speak out,” he said in a video on Twitter.

General Boyd and Ms. Matthews married in 2005. She survives him. In addition to his son, General Boyd, who lived on a farm outside Marshall, Va., is also survived by a daughter, Jessica Van Tillborg; four granddaughters; and his sister, Shirlee Bouch.