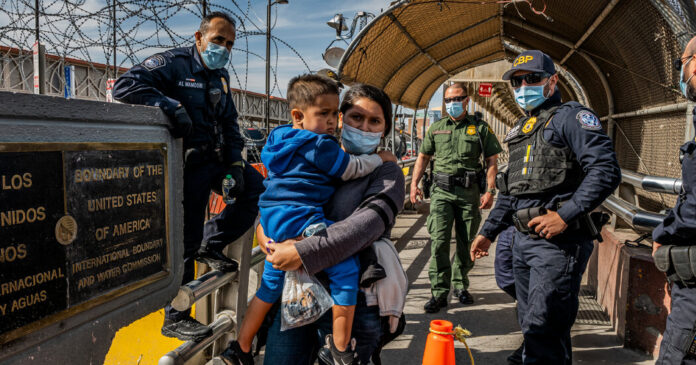 WASHINGTON — The Centers for Disease Control and Prevention announced on Friday that it would lift an emergency public health order that had restricted immigration at U.S. land borders since the beginning of the pandemic, citing “current public health conditions and an increased availability of tools to fight Covid-19.”

Federal officials expect the policy change, which will go into effect on May 23, to draw thousands more migrants to the southwest border every day, in addition to the already high number of people who have been arriving over the past year from Latin America and across the globe. Republicans, who have described the border situation as out of control under President Biden, immediately condemned the C.D.C.’s decision. The order has been used to expel migrants about 1.7 million times over the past two years.

“These measures, along with the current public health landscape where 97.1 percent of the U.S. population lives in a county identified as having ‘low’ Covid-19 community level, will sufficiently mitigate the Covid-19 risk for U.S. communities,” the C.D.C. said in a statement. The C.D.C. also said it has the right to issue the order again if necessary.

The order, known as Title 42, gives officials the authority to turn away migrants at the border, including those seeking asylum. The process takes about 15 minutes, a factor that has helped the Border Patrol manage the sometimes overwhelming number of undocumented migrants gathering at the border. Without the order in place, stations will be more overcrowded and backed up while officials go through the typical screening process, which can take more than an hour per person.

The continuation of the public health order over the past two years thrust the typically apolitical C.D.C. into the heated immigration debate.

The agency had been under growing pressure from Democratic lawmakers, including Senator Chuck Schumer of New York, the majority leader, to not only end the rule but also provide justification for why it was necessary. Public health experts have questioned the order’s value in containing the coronavirus, especially at this point in the pandemic. The Biden administration began offering vaccinations to undocumented migrants at the border this week.

News of the decision broke on Wednesday; it is expected to face legal challenges.

When the C.D.C. explained in August why it was extending the order, Covid-19 cases were averaging more than 60,000 a day, the highly transmissible Delta variant was causing more hospitalizations, and the number of deaths caused by the virus was increasing.

Currently, case numbers have fallen sharply in most of the United States, and the C.D.C. has loosened many restrictions. The average number of cases on Thursday was less than 28,000 a day. An Omicron subvariant, BA.2, could cause another surge in the United States in the coming months, though it does not appear to be causing widespread severe illness in Europe, where caseloads are higher.

The White House and Department of Homeland Security have deflected questions about the policy in recent months to the C.D.C., which said little about its rationale for extending the order.

But unlike with other public health measures put in place during the pandemic, the C.D.C. never publicly disclosed scientific data that showed that undocumented migrants crossing the border were a major vector for the coronavirus.

“It’s far from clear that the C.D.C.’s order serves any purpose,” a panel of judges on the U.S. Court of Appeals for the District of Columbia Circuit wrote in a ruling in March on a case about the public health rule.

The order — which advocates say has put many people who were expelled under it in grave danger because of violence, poverty and instability in their home countries — has faced several lawsuits. Immigration advocates were under the impression that the Biden administration was working to lift the rule last summer for some migrants, but that never happened.

Some advocates said this week that waiting until late May to lift the order would further endanger the lives of vulnerable migrants seeking asylum.

“Given how long the administration has had to plan for the end of Title 42, the number of lives at stake daily and the court decisions finding Title 42 illegal, it is essential the administration immediately begins winding down Title 42 and not wait to do so until the end of May,” said Lee Gelernt, a lawyer with the American Civil Liberties Union who has been one of the lead voices arguing that the rule should be lifted for migrant families.

Some critics have also said that the rule has fueled racist notions that immigrants carry infection into the United States.

Dr. Anthony S. Fauci, the nation’s top infectious disease expert, has said that immigrants were not a driving force in the spread of the coronavirus in the United States.

“Focusing on immigrants, expelling them or what have you, is not the solution to an outbreak,” he said on CNN in October.

Even before the pandemic, the Trump administration tried to get the C.D.C. to use its authority to issue such an order to address an outbreak of mumps in immigration detention centers in six states, and separately when Border Patrol stations were hit with the flu. Those attempts were not successful, in part because other administration officials argued that there was no legal basis.