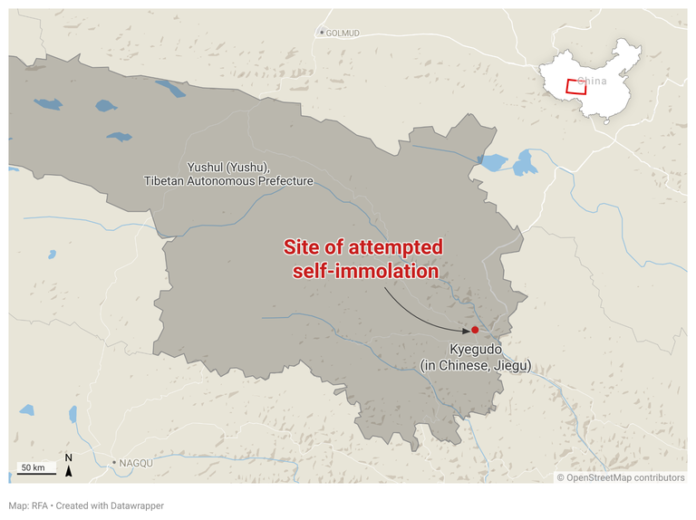 A Tibetan man set himself on fire near a police station in a Tibetan region of northwestern China’s Qinghai province and was immediately taken away by authorities with no word on his condition, sources in India said Thursday, a day after the incident.

The man, known only as Tsering Samdup, or Tsering, self-immolated on Wednesday afternoon in front of a Chinese police station near a Buddhist monastery in Kyegudo (in Chinese, Jiegu), in Yushul (Yushu) Tibetan Autonomous Prefecture in Qinghai, a Tibetan exile source in India told RFA’s Tibetan Service.

“The Tibetan who self-immolated is a very well-educated person. He was immediately taken away by the Chinese police and no one is allowed to meet or inquire about the self-immolator,” the source told RFA.

“There are no particular restrictions in place in Kyegudo at the moment by the Chinese authorities, in order to present a very normal ambience,” the source added.

A report by the Central Tibetan Administration, the Tibetan government in exile in Dharamsala, India, confirmed the time and place of the incident, but added: “verifiable information on the name and background detail of the self-immolator is not available.”

With Wednesday’s incident, 159 Tibetans are confirmed to have set themselves on fire since 2009, mostly to protest Chinese rule in Tibetan areas, and another eight have taken their lives in Nepal and India, home to large exile populations.

The previous known self-immolation took place on Feb. 25, when popular contemporary singer Tsewang Norbu, 25, shouted slogans and set himself on fire in a protest in front of the iconic Potala Palace in the Tibet regional capital Lhasa.

Tsering’s attempt is the first one in Yushul since a spate of six self-immolations by men aged 22 to 62 in 2012.

A region of nomads and monasteries that was part of Tibet’s traditional Kham province, Yushul lies at an altitude of 3,700 m (12,100 ft) in the mountainous eastern edge of the Tibetan plateau.

Sporadic demonstrations challenging Beijing’s rule over what was an independent nation until China’s invasion in 1950 have continued in Tibetan-populated areas of China since widespread protests swept the region in the run-up to the 2008 Beijing Olympics.

High-technology controls on phone and online communications in Tibetan areas often prevent news of Tibetan protests and arrests from reaching the outside world, and sharing news of self-immolations outside China can lead to jail sentences.