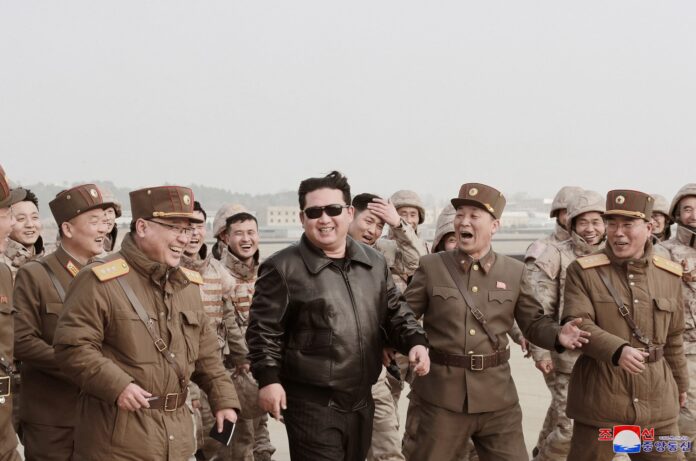 Following North Korea’s intercontinental ballistic missile (ICBM) launch last week, its first since 2017, the country’s media has been lauding it as evidence of Kim Jong Un’s leadership and bravery, sources in the country told RFA.

But citizens and soldiers alike are beginning to resent the use of missile launches to praise Kim Jong Un, who is reverently referred to as the “Highest Dignity,” and would rather the government pay more attention to issues like food and supply shortages.

Though it was initially believed that North Korea launched the Hwasong-17 ICBM on March 24, South Korean military authorities reported Tuesday that it was in fact the older Hwasong-15. The Hwasong-17 was involved in a failed launch on March 16 and exploded over Pyongyang, they said.

“Today, while I was reading the news report in the Rodong Sinmun newspaper app on my smartphone, there was a report saying the Highest Dignity signed an order to launch an ICBM and I was skeptical whether our leader is the right person,” an official of Ryongchon county, in the northwestern province of North Pyongan, told RFA’s Korean Service.

“This year, the authorities insist that the food problem should be solved by decisively increasing agricultural production. Cooperative farms are struggling because they do not have fertilizer and other materials that are desperately needed for farming preparations, but the authorities do not provide any funds,” said the source, who requested anonymity for security reasons.

He said that the money the government is using for nuclear and missile development could be better used to boost the agricultural sector, but the government keeps launching missiles, so farm officials are angry.

In the city of Chongju in the south of the province, government loudspeakers have been broadcasting propaganda about the missile test.

“It says the Highest Dignity directly guided the launch of an ICBM that could stand up to a long-term confrontation with the United States,” a resident of the city told RFA. “This is the 13th missile they launched this year alone. They are acting like kids playing war games. Is this something we should be proud of?

“The authorities’ propagandize that the launch of the ICBM was carried by the handwritten order of the Highest Dignity, which said to ‘launch bravely for the great dignity and honor of the country and people’. The residents find it absurd … expressing anger at authorities who turn a blind eye to their livelihoods,” the second source said on condition of anonymity for safety reasons.

Soldiers in the military also see through the propaganda, griping that authorities are telling to sacrifice their lives for the nation, just as the soldiers who launched the missile are somehow sacrificing themselves to fulfill the orders of Kim Jong Un.

The soldiers and officers have been attending daily “mental education classes” where they learn that the Red Flag Company, which launched the ICBM, are elite fighters who follow through on Kim Jong Un’s orders.

“However, the soldiers who listened to the instructor’s lecture continued to have expressionless faces as if they did not know what they were willing to sacrifice their lives for. The soldiers griped about the military authorities, who were forcing them to listen to this propaganda when they needed time to rest after their grueling winter training,” the third source said.

Another military source, in North Pyongan, told RFA that the officers there are not buying the propaganda.

“They know that another intercontinental ballistic missile launch failed on the 16th, so they are wondering how much money was wasted again for this launch,” the fourth source said.

“Rather than focusing on the development of missiles, officers believe that it is urgent for the authorities to improve the poor supply situation in order to increase the morale of the soldiers. This would also increase the actual combat power of the military,” he said.

Translated by Leejin Jun. Written in English by Eugene Whong.