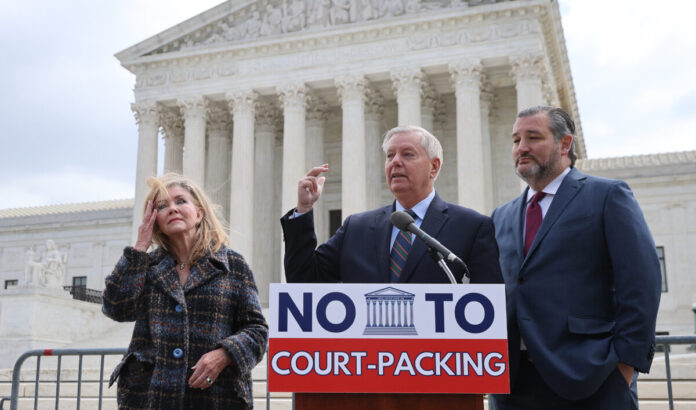 Swing-voting Senate Republicans are lining up against the confirmation of Judge Ketanji Brown Jackson to the Supreme Court (SCOTUS), dashing Democrats’ hopes that she would win moderately bipartisan support.

Many swing-voting Republicans insisted that they opposed her due to her performance in other positions and her lack of a clearly-stated judicial philosophy.

On Thursday Sen. Lindsay Graham (R-S.C.), who voted to confirm Jackson to the D.C. District Court of Appeals last June, said that he would not support Jackson’s confirmation this time around.

“I oppose and will vote against the nomination of Judge Jackson to the Supreme Court,” Graham announced in a Twitter thread.

Despite her “exceptionally good character,” Graham said, “[Jackson’s] record is overwhelming in its lack of a steady judicial philosophy and a tendency to achieve outcomes in spite of what the law requires or common sense would dictate.

“After a thorough review of Judge Jackson’s record and information gained at the hearing from an evasive witness, I now know why Judge Jackson was the favorite of the Radical Left.”

Sen. Richard Burr (R-N.C.), considered a potential defector by observers, also came out against Jackson’s confirmation in a Thursday statement, in which he tied his opposition to Jackson to her refusal to give an answer on whether court-packing was good.

“My top concern going into our meeting was ascertaining Judge Jackson’s position on radical proposals to pack the Supreme Court by expanding the number of justices. Court packing is a transparent power grab—one that would forever compromise the integrity, impartiality, and independence of the Supreme Court,” Burr wrote.

“While she is undoubtedly highly qualified, knowledgeable, and experienced, based on our discussion, I cannot support Judge Jackson’s nomination when it comes before the Senate.”

“There is no doubt that Judge Jackson is well qualified and her nomination as the first black woman to the Supreme Court is historic,” Tillis said. “I was impressed with her knowledge, her composure, and her character during more than twenty hours of questioning.

“However, based on her record, I still hold my initial concerns that she may legislate from the bench instead of consistently following the Constitution as written. I am also disappointed that she is reluctant to take a firm public stand against a liberal, dark money court-packing scheme that represents a fundamental threat to the independence of the federal judiciary, even though other justices like Ruth Bader Ginsburg and Stephen Breyer have done so.”

Still, Tillis agreed that it was “highly likely” that Jackson would be confirmed despite his opposition, and he said, “I wish her and her wonderful family all the best.”

Other Republicans have yet to commit either way.

Outgoing-Sen. Roy Blunt (R-Mo.), who is set to retire after the 117th Congress concludes, admitted that he would “really like to vote for the first Black woman to go on the court.”

However, he made clear that his decision would be contingent on Jackson’s track record and judicial ideology, but he has largely stayed mum on the nominee, leading some to suspect that Blunt may throw his support behind her.

“I have begun a deeper dive, a much deeper dive than I had during the prior evaluation,” Romney, who voted against Jackson’s rise to the D.C. District Court last June, told CNN.

“In this case, as well, she’s gone into much more depth talking about her judicial philosophy than she had before. And we’re, of course, looking at her judicial record, as a district judge, and as an appellate judge, in far more depth than we had before,” Romney added.

Sen. Lisa Murkowski (R-Alaska) is considered the most likely of the uncommitted Republicans to swap in favor of Jackson.

However, Murkowski has suggested that Jackson’s track record on child pornography cases is “worth looking into.”

“If it really is a pattern, that’s something I think we should be paying attention to,” Murkowski said. “If it’s an issue of one-offs that have been hyped into more than that, I think that’s something we need to try to discern.”

Jackson has already locked down the support of at least one GOP lawmaker—Sen. Susan Collins (R-Maine), who announced her decision to vote for Jackson on Wednesday.

“I have decided to support the confirmation of Judge Jackson to be a member of the Supreme Court,” she said. “In recent years, senators on both sides of the aisle have gotten away from what I perceive to be the appropriate process for evaluating judicial nominees.

“In my view, the role under the Constitution assigned to the Senate is to look at the credentials, experience, and qualifications of the nominee. It is not to assess whether a nominee reflects the individual ideology of a senator or would vote exactly as an individual senator would want.

“There can be no question that she is qualified to be a Supreme Court justice.”

On the other side of the aisle, Democrats’ most notable swing-voter, Sen. Joe Manchin (D-W. Va.), who Republicans thought might be persuaded to oppose her, has said that he will support Jackson.

Only Sen. Kyrsten Sinema’s (D-Ariz.) vote remains unclear. She has made few public statements on Jackson, and could not be immediately reached for comment.

However, even if she were to oppose Jackson’s nomination, her vote would be cancelled out by Collins, short of an unexpected Democrat defection in opposition to Jackson.