US Liaising With Ukrainian Forces in Poland, Pentagon Says 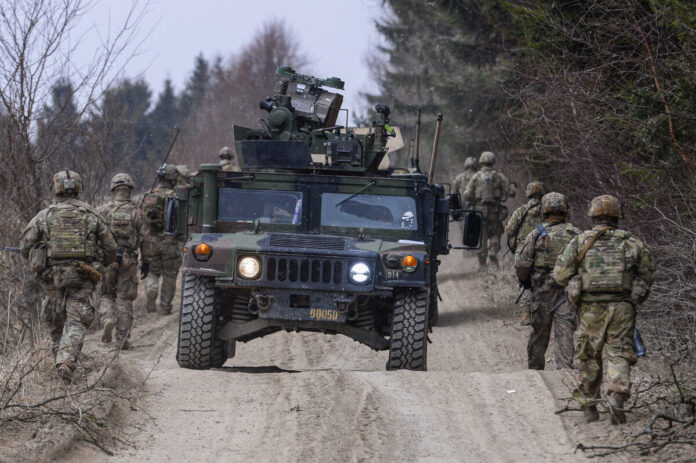 The latest on the Russia–Ukraine crisis, March 29. Click here for updates from March 28.

US Liaising With Ukrainian Forces in Poland, Pentagon Says

The Pentagon on Tuesday clarified that U.S. troops in Poland were “liaising” with Ukrainian forces as they hand over weapons to them, but were not training “in the classic sense” following remarks from President Joe Biden on the matter.

On Monday, Biden told reporters that while in Poland last week, he had been talking to U.S. troops who were helping “train” Ukrainian forces in Poland.

Pentagon spokesman John Kirby told reporters that U.S. troops in Poland were “liaising” with Ukrainian forces when weapons are handed over to the forces fighting back against Russia’s invasion.

“It’s not training in the classic sense that many people think of training. I would just say it’s liaising,” Kirby said.

He did not provide details on what exactly the interactions entail or how long they usually lasted. It was not immediately clear whether the distinction between liaising and training had greater significance, as the United States tries to limit any direct military involvement in the war.

The U.N. food chief warned on Tuesday that the war in Ukraine was threatening to devastate the World Food Programme’s efforts to feed some 125 million people globally because Ukraine had gone “from the breadbasket of the world to breadlines.”

“It’s not just decimating dynamically Ukraine and the region, but it will have global context impact beyond anything we’ve seen since World War Two,” WFP Executive Director David Beasley told the 15-member United Nations Security Council.

Beasley said 50 percent of the grain bought by the WFP, the food-assistance branch of the United Nations, comes from Ukraine, “so you can only assume the devastation that this is going to have on our operations alone.”

“The farmers are on the frontlines,” he said.

Beasley added that the crisis was compounded by a lack of fertilizer products coming from Belarus and Russia.

“If you don’t put fertilizer on the crops, your yield will be at least 50 percent diminished. So we’re looking at what could be a catastrophe on top of a catastrophe in the months ahead,” he told the council.

Ukrainian President Volodymyr Zelenskyy on Tuesday said the signals from peace talks with Russia could be called positive but added that they did not drown out the explosions from Russian shells.

In a late-night address, Zelenskyy also expressed caution about Russia’s promise to sharply curtail military action in some areas and said Ukraine would not be easing off its defensive efforts.

“We can say the signals we are receiving from the talks are positive but they do not drown out the explosions of Russian shells,” he said, adding that Ukraine could only trust a concrete result from the talks.

Earlier in the day, Russia promised to scale down military operations around Ukraine’s capital and north.

Zelenskyy said that despite this vow, “the situation has not become easier … the Russian army still has significant potential to continue attacks against our state.” He added: “Therefore we are not reducing our defensive efforts.”

Zelenskyy reiterated that for any peace deal to work, Russian troops would have to leave and there could be no compromise on Ukraine’s sovereignty and territorial integrity.

The Pentagon says it has detected “small numbers” of Russian ground forces moving away from the Kyiv area.

Spokesman John Kirby said Tuesday that the movement appears to be a repositioning of forces, “not a real withdrawal.” He said it was too soon to say how extensive the Russian movements may be or where the troops will be repositioned.

“It does not mean the threat to Kyiv is over,” he said. “They can still inflict massive brutality on the country, including on Kyiv.”

He said Russian airstrikes against Kyiv are continuing.

Asked whether the Pentagon assesses that the Russian military campaign in Ukraine has failed, Kirby said the Russian forces have failed in their initial objective of conquering Kyiv but remain a threat to the country, including the eastern Donbas region where Russian forces now appear to be focusing more fully.