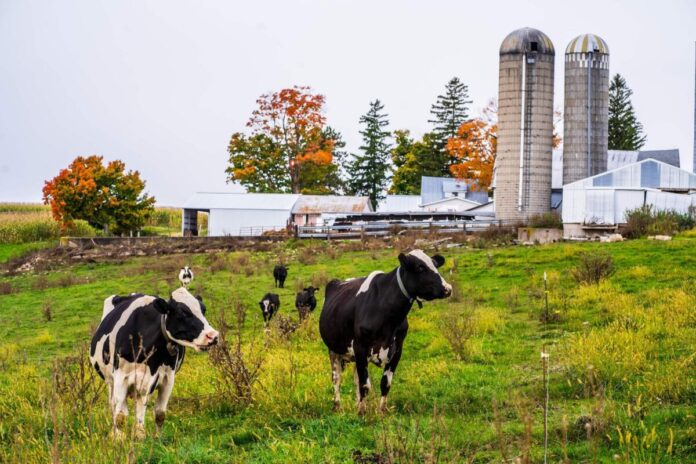 Rep. Tom Tiffany (R-Wis.) has introduced new legislation that would eliminate the energy credit for wind and solar installations if they are operated by a public utility on agricultural land.

Known as the Future Agriculture Retention and Management Act of 2022, or FARM Act of 2022, the bill was referred to the House Committee on Ways and Means on Feb. 28.

“I kept hearing stories about how productive agricultural land in Wisconsin and around the country was being used for these projects,” Tiffany said in an interview with The Epoch Times.

“It deeply concerns me that we’re going to take productive agricultural land out of production for something that’s intermittent and requires enormous subsidies to survive in the marketplace.”

Tiffany told The Epoch Times that a farmer in western Wisconsin reached out to him last year and said he was being offered $800 an acre and 25 years of guaranteed rent to put up utility-scale solar on his property.

According to Tiffany, a typical farmer in his district would pay $150 to $200 an acre in rent. That’s in line with a 2020 state-level estimate from the U.S. Department of Agriculture, which listed an average price of $138 per acre.

“This farmer was really concerned about this. He said, ‘I could do this and make a bunch of money—but that’s not the best thing for America, especially when it comes to food production,’” Tiffany said.

“Some of the rent offers per acre for land, for wind, and solar are just something that normal farmers can’t compete with,” said Isaac Orr, an energy expert at the Center of the American Experiment, in an interview with The Epoch Times.

Tiffany first announced the bill with Orr. Like Tiffany, Orr grew up on one of Wisconsin’s many dairy farms.

“A lot of times, it is the people who are the furthest removed from jobs where you get your hands dirty that are the most enthusiastic about these kinds of low-energy societies that are based on this kind of fairy tale of wind, solar, and batteries,” Orr told The Epoch Times.

Some solar boosters have promoted “agrivoltaics,” which are systems pairing photovoltaic solar panels with agricultural production.

Last year’s “Solar Futures Study” from the Department of Energy, for example, noted that the USDA supports “integrated agricultural systems”—that is, approaches to farming aimed at realizing more than one function from the same piece of land, often in line with ESG or ESG-like principles.

The DoE suggested agrivoltaics could fall into this category, citing, among other research, a study that indicated the combination of solar installations and crop production could make land up to 70 percent more productive.

Orr voiced skepticism about the feasibility of growing crops under, or near, large solar panels. He also noted that livestock could damage such installations.

Tiffany’s bill comes as food shortages have become a looming threat, with President Joe Biden saying last week that such shortages would be “real.”

“I think we’re going to see a rebalancing of our priorities when it comes to energy and agriculture,” Orr said, citing the Russia-Ukraine war’s impact on global energy markets as well as China’s dominance of the global supply chain for solar panels.

Various states, including Iowa and Oregon, have also seen efforts to slow the spread of utility-scale solar on American farmland.

“The next step is to talk to some state legislators, because it should be a real concern for them,” Tiffany said.

Orr noted that Tiffany’s bill does not outright ban wind or solar.

“If the shareholders want this, then fine—that’s their opportunity. But the U.S. taxpayer should not be ensuring that they’re going to get their money back,” he said.

“There is no free market for electricity. I completely acknowledge that. But that doesn’t mean we should be encouraging rational actors to do irrational things.”

The Epoch Times has sought a comment from the chair of the House Ways and Means Committee, Rep. Richard Neal (D-Mass.), regarding Tiffany’s bill.

The Epoch Times has also reached out to the ranking member of that committee, Rep. Kevin Brady (R-Texas).