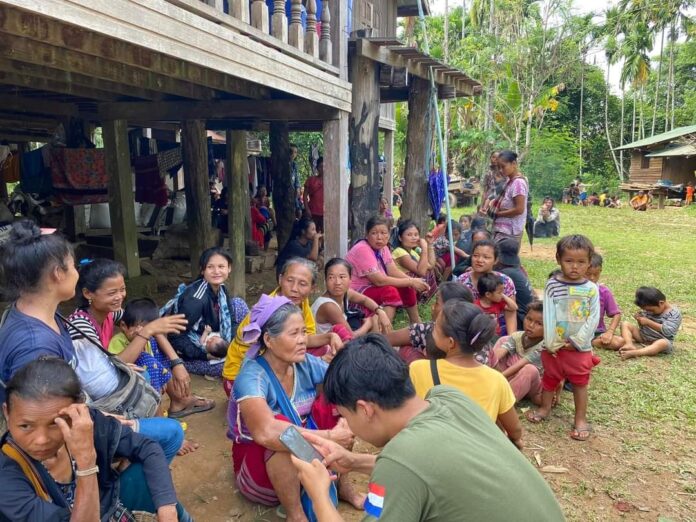 Fighting between junta troops and ethnic Karen rebels in eastern Myanmar’s Kayin state has forced more than 10,000 civilians to seek shelter along the country’s shared border with Thailand, but Thai officials have refused entry to the refugees and aid workers warned Tuesday of a food shortage risk.

Since mid-March, soldiers with the Karen National Liberation Army have engaged in several clashes with the military in Kayin’s Myawaddy township. Thousands of villagers living along the Myawaddy-Walay road have set up makeshift camps along the Moei River, which separates Myanmar and Thailand, to escape the conflict.

On Saturday, heavy fighting in the Wawlay and Lay Kay Kaw areas of Myawaddy forced around 1,000 people to cross the Moei into Thailand, but Thai authorities later sent them back across the border, according to an official from a refugee camp in Myawaddy’s Phalu Lay village.

“We crossed to the Thai side and then Thai soldiers came and said we could stay there only for the night. They said we’d have to cross back in the morning when the fighting stopped,” said the official, who spoke to RFA’s Myanmar Service on condition of anonymity.

“The next morning, we returned and stayed in our camp. Some of those who were very scared stayed behind on the Thai side. The Thai soldiers came again this morning and told them they could not stay any longer. So, we have called everyone back to our camp. The other side did not accept us at all.”

The camp official said he hopes Thai authorities will reconsider and allow the refugees temporary asylum during the fighting, which has worsened in recent days.

Aid workers told RFA that, instead of offering refuge, Thai authorities are tightening security along the river and are searching border villages for any Myanmar nationals who have crossed illegally.

One aid worker said border camps are securing food from the town of Mae Sot in Thailand but warned that the flow of goods “is not official” and remains at risk of being shut down.

“These routes work because we have an understanding [with the local authorities]. But when donors share information on social media about how they have provided help and from which places, they could be closed. That’s a problem,” the worker said.

“If the current supply routes are blocked, tens of thousands of refugees will be in trouble.”

Some camps along the Moei River “only have rice and onions,” workers said, while recent heavy rains have destroyed supplies in others.

The situation along the border is similar to one in December, when intensified fighting in Kayin state forced more than 20,000 people to flee to Thailand. At that time, Thai authorities opened temporary camps to receive the refugees, but the camps were closed, and refugees were sent home when the fighting subsided.

Only around 2,000 refugees continued to live in makeshift camps along the Myanmar side of the river, but that number swelled to more than 10,000 amid renewed fighting in March.

A woman living along the river in Myanmar, who declined to be named, told RFA about the state of the camps in recent days.

“Now, there are people from Wawlay as well as from Ingyin Myaing and Sone-Zee-Myaing. And there are also people who were already living on the riverbank,” she said.

“Since the Thais did not allow us to enter, people are staying on sandbanks in the middle of the river. The main problem is [a lack of] drinking water. There are some young mothers who have just given birth. We need blankets, dry rations and medicine.”

Somchai Kijcharoenrungroj, the governor of Tak province in Thailand, told RFA-affiliated Benar News that authorities there are not deporting Myanmar nationals.

“Currently, there are still people being displaced from Myanmar, gathering along the border, and periodically crossing into Thailand. The figures are always fluctuating. Lately, there are about 100 to whom we gave sanctuary and humanitarian aid,” he said.

“Regarding repatriation or pushback, we affirm that no such thing has taken place. Most of them voluntarily return because when things calm down, they must go look after their property.”

Junta Deputy Minister of Information Maj. Gen. Zaw Min Tun told RFA that temporary camps are being set up in and around Myawaddy township for those fleeing the fighting.

“If it’s going to take time for them to return to their places of residence, we consider them to be [displaced persons]. If it isn’t, it is considered a temporary evacuation,” he said.

“There is fighting in some places and that is why we are making preparations to set up temporary shelters for refugees in and around Myawaddy.”

Pado Saw Tawney, foreign affairs officer for the Karen National Union (KNU), the political party affiliated with the KNLA, said some of the routes leading into the area had been closed since Sunday due to the clashes. He called for the junta to withdraw its troops from Karen National Liberation Army (KNLA) territory.

“The problem is that [the military was] talking about a ceasefire at the same time it was sending troop reinforcements,” he said. “We have had to engage in self-defense. Things will calm down again if their troops withdraw. If they don’t withdraw, there will inevitably be clashes. It’s difficult to say for sure what will happen.”

Sources told RFA that people fleeing the fighting in Kayin along the Thai border are from towns and villages under KNLA control including Wawlay, Lay Kay Kaw, Maetawthalay, Phlugyi, Plululay, and Ingyinmyaing.

Meanwhile, officers from the Myawaddy Myoma Police Station have arrested a Myawaddy-based reporter for the Karen Information Center (KIC) news agency named Nay Naw, a source who is close to the man’s family told RFA.

The source, who asked to remain anonymous for security reasons, said that police had summoned Nay Naw to the station twice for questioning on Monday and detained him during the second meeting.

“They didn’t tell us where he is being detained, but we have heard he is being held in the Myawaddy Myoma Police Station,” the source said. “We don’t know if he has been tortured or beaten.”

The junta has yet to issue a statement on Nay Naw’s arrest, and RFA was not immediately able to verify his detention.

In March alone, the junta has sentenced Hanthar Nyein, the editor of Kamayut Media; Than Htike Aung, the editor of Mizzima News; Ye Yint Htun, a reporter with Myanmar Thandaw Sint; and Aung Zaw Zaw of the Mandalay Free Press to two years each in prison.

On Monday, New York-based Committee to Protect Journalists (CPJ) issued a statement calling for the immediate and unconditional release of Ye Yint Htun and demanding that authorities stop imprisoning members of the press for the work that they do.

Ye Yint Htun was sentenced on March 23 for allegedly disseminating “fake news” and publishing information that could cause fear or alarm. He was first arrested on Feb. 28, 2021, while covering a protest and was held in pretrial detention until his sentencing, according to media reports.

“Myanmar’s junta should be releasing, not sentencing, the dozens of journalists it wrongfully holds behind bars.”

CPJ ranks Myanmar as the world’s second-worst jailer of journalists, trailing only China.

Authorities have arrested at least 115 reporters since the military seized power in a Feb. 1, 2021, coup and 39 remain in detention, according to data compiled by RFA. Three journalists have been killed by security forces during crackdowns on anti-junta protests or during interrogation.