Collins Will Vote for Judge Jackson’s Confirmation to SCOTUS 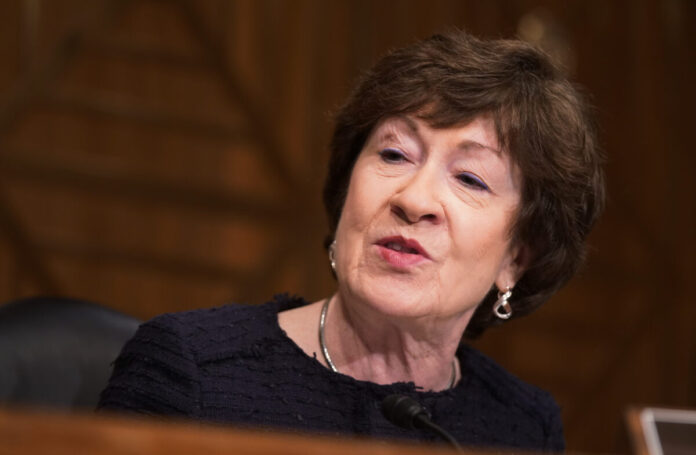 Collins told the New York Times that after a Tuesday meeting with Jackson, President Joe Biden’s pick to replace outgoing Justice Steven Breyer, her concerns were alleviated, and she will give Jackson her support. Collins is the only Republican to commit to voting for Jackson.

“I have decided to support the confirmation of Judge Jackson to be a member of the Supreme Court,” Collins said.

“In recent years, senators on both sides of the aisle have gotten away from what I perceive to be the appropriate process for evaluating judicial nominees,” Collins said, explaining her decision to break with her party and support Jackson.

“In my view, the role under the Constitution assigned to the Senate is to look at the credentials, experience and qualifications of the nominee. It is not to assess whether a nominee reflects the individual ideology of a senator or would vote exactly as an individual senator would want.

“There can be no question that she is qualified to be a Supreme Court justice,” Collins added.

Collins was one of only three Republicans in the Senate who supported Jackson’s ascent to the D.C. Circuit Court of Appeals in June 2021. Under President Donald Trump, Collins supported the confirmations of Justices Neil Gorsuch and Brett Kavanaugh, but voted against confirming Justice Amy Coney Barrett due to the proximity of the 2020 election.

Jackson erred away from articulating such a judicial philosophy, saying instead that she has a “methodology” of litigation that could vary on a case-by-case basis.

Out of all potential swing voters on the GOP side of the aisle, Collins was widely regarded as the one most likely to break away from her party and vote in favor of Jackson. While observers have mused on the possibility of other potential defectors, Collins is thus far the only one to commit resolutely to voting for Jackson.

Another potential swing vote is Sen. Mitt Romney (R-Utah), who has shown himself to be willing to break with Republicans in the past over various issues.

On Tuesday, Romney, who opposed Jackson’s confirmation to the D.C. Circuit Appeals Court last summer, says that he has undertaken “a much deeper dive” into Jackson’s record ahead of the Senate floor vote, which will take place sometime after April 4.

“In this case, as well, she’s gone into much more depth talking about her judicial philosophy than she had before. And we’re, of course, looking at her judicial record, as a district judge, and as an appellate judge, in far more depth than we had before,” Romney said, referencing a common GOP concern over Jackson’s confirmation.

“I think in the final analysis, we’ll each be able to make our decision based upon our personal interviews with Judge Jackson and with the results that come from these hearings,” Romney concluded.

Sen. Lindsey Graham (R-S.C.), one of three Republicans who supported Jackson’s nomination to the D.C. Circuit last summer, has also refrained from committing either way, but he has indicated that he will vote against Jackson’s SCOTUS confirmation.

Sen. Lisa Murkowski (R-Alaska), considered the second most likely swing vote by some, has also remained uncommitted, but has suggested that Jackson’s track record on child pornography cases is “worth looking into.”

“If it really is a pattern, that’s something I think we should be paying attention to,” Murkowski said noncommittally. “If it’s an issue of one-offs that have been hyped into more than that, I think that’s something we need to try to discern.”

On the Democrats’ side of the aisle, Sen. Joe Manchin (D-W.Va.) was considered the most likely to vote against Jackson’s confirmation. However, the West Virginia Democrat confirmed on March 25 that he will support Jackson.

With Collins’ commitment to vote for the nominee, Jackson is on track to receive a thinly-bipartisan confirmation to the Supreme Court.

Because Judiciary Ranking Member Chuck Grassley (R-Iowa) requested that the committee vote on Jackson be held for one week, she will not head to the floor until April 4 at the earliest.