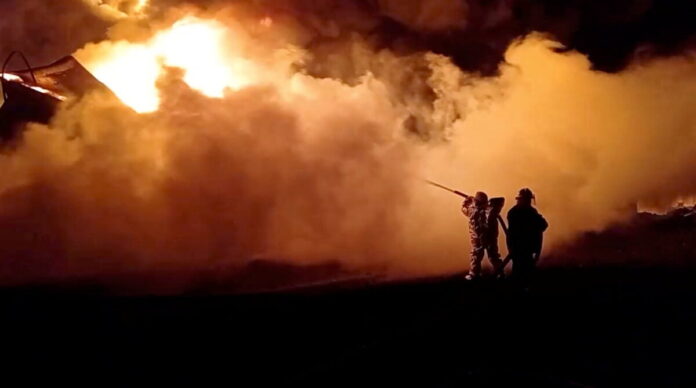 A Russian missile struck an oil depot in western Ukraine late on Monday, the governor of the Rivne region said.

Governor Vitaliy Koval said in a brief video address on social media that emergency services were at the scene, without elaborating.

The attack marks the second on oil facilities in the region and is the latest in a series of such attacks in recent days.

Western Ukraine has not seen ground combat, but missiles have struck oil depots and a military plant in Lviv, a major city close to Poland where hundreds of thousands of Ukrainians have gone to shelter from fighting elsewhere.

Ukrainian President Volodymyr Zelenskyy suggested in an interview with prominent independent Russian journalists released on Sunday that the attacks on oil depots are intended to disrupt the planting season in Ukraine, which is a major grain producer.

Russia and Ukraine are key exporters of grain, supplying nearly 30 percent of wheat and nearly 20 percent of corn in the global market.

Psaki said that although the United States is not likely to be impacted by a food shortage, the White House does expect that higher energy, fertilizer, wheat, and corn prices sparked by the Ukraine invasion could impact the price of growing and purchasing critical food supplies for countries around the world.

Among the most reliant on Russia and Ukraine for their wheat supply are developing nations in northern Africa and Asia.

“Early estimates from the World Bank suggest disproportionate impacts on low- and middle-income countries including in Africa, the Middle East, and Southeast Asia,” Psaki said.

The attack comes ahead of expected negotiations between Russia and Ukraine in Istanbul this week.

Kremlin spokesman Dmitry Peskov said on Monday that talks could begin as soon as Tuesday.

The spokesman declined to elaborate on the details of the negotiations.

“While we cannot and will not speak about progress at the talks, the fact that they continuing to take place in person is important, of course,” Peskov said. ”We are adhering to a policy of not disclosing any information about the talks, which we think could only hurt the negotiation process.”

He acknowledged that no “substantial achievements or breakthroughs” have been achieved in previous rounds of negotiations between the two nations.

Zelenskyy said in his interview on Sunday that Ukraine is “ready” to discuss “security guarantees and neutrality, the non-nuclear status of our state.”

Putin has sought reassurance that Ukraine will not seek NATO membership.