Russia to Cut Down on Military Activity Near Ukraine’s Capital: Officials 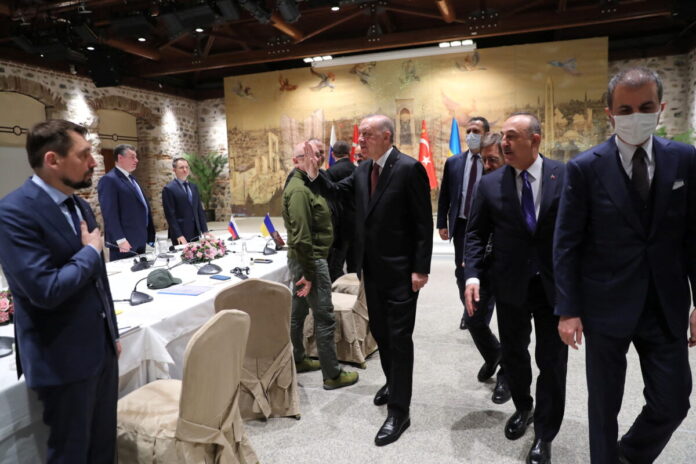 Russia is cutting down on its military activity near the Ukrainian capital of Kyiv, an official said after the latest round of negotiations between the warring countries.

Alexander Fomin, Russia’s deputy minister of defense, said the activity was reduced “drastically” near Kyiv and Chernigov, another city in northern Ukraine that sits about 150 kilometers (93 miles) from Kyiv.

Fomin was speaking to reporters after the latest round of Russia–Ukraine negotiations ended, state media reported.

Russian officials say the reduction was made to try to smooth peace negotiations.

Russia agreed to a meeting between Russian President Vladimir Putin and Ukrainian President Volodymyr Zelenskyy, but only after a draft of a peace treaty is approved.

Ukraine’s written proposal for a treaty, which says the country will be a neutral nation that will not try to get nuclear weapons, will be conveyed to Putin, said Medinsky, who also said his group protested against the alleged treatment of Russian prisoners of war, with videos appearing to show Ukraine’s military abusing them.

David Arakhamia, the top Ukrainian negotiator, said Ukraine is seeking security guarantees from outside nations like the United States and Israel but that the guarantees would not apply to certain portions of Ukraine, including parts of the east where local officials have declared independence.

Mykhailo Podoliak, also part of the Ukrainian delegation, wrote on Twitter that the guarantees would be similar to Article 5 of NATO, which essentially triggers a military response if any NATO member is attacked. Ukraine wants outside countries to commit to protecting it “from any aggression,” he said.

“If we manage to consolidate these key provisions, and for us this is the most fundamental, then Ukraine will be in a position to actually fix its current status as a non-bloc and non-nuclear state in the form of permanent neutrality,” Ukrainian negotiator Oleksander Chaly told reporters in Istanbul.

Russia invaded Ukraine on Feb. 24 and war has been waging since then. The United Nations estimates that thousands of civilians and troops have been killed in the fighting.