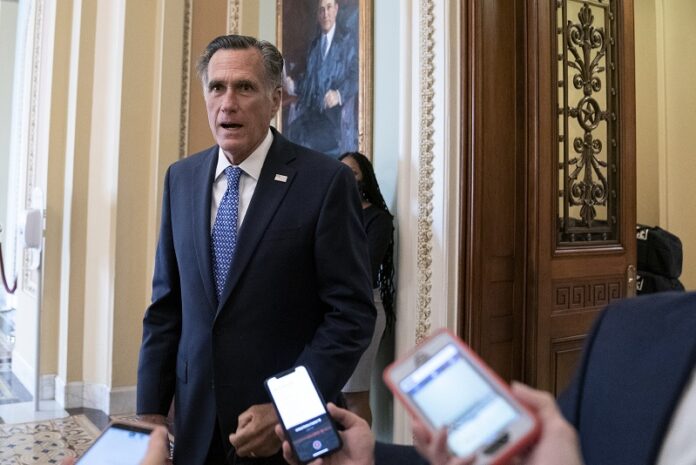 Sen. Mitt Romney (R-Utah) said in an interview with CNN that he was planning “a much deeper dive” into Judge Ketanji Brown Jackson’s record ahead of the Senate vote to confirm her to the Supreme Court.

Romney has long been known for voting much closer to the center than his GOP colleagues, and some Democrats view him as a potential swing-voter in favor of Jackson.

Romney said that he has not made the decision whether he will vote for her or not, but he was opposed to her nomination to the D.C. District Circuit Court last year. This time around, he promised to look much further into her track record before making a decision.

“I have begun a deeper dive, a much deeper dive than I had during the prior evaluation,” Romney told CNN.

“In this case, as well, she’s gone into much more depth talking about her judicial philosophy than she had before. And we’re, of course, looking at her judicial record, as a district judge, and as an appellate judge, in far more depth than we had before,” he continued, referencing a common GOP concern over Jackson’s confirmation.

However, Romney also said that some of the lines of questioning explored by his GOP colleagues during the hearings—particularly over her track record on sentencing child pornography offenders, which led to an especially heated exchange between Jackson and Sen. Ted Cruz (R-Texas)—was “a little hot.”

“I think any setting like this that doesn’t show respect for the witness, or in this case the judge, is not the right way for us to go. We should show, in my opinion, more respect for one another. And so sometimes the rhetoric was a little hot,” Romney said.

“I think in the final analysis, we’ll each be able to make our decision based upon our personal interviews with Judge Jackson and with the results that come from these hearings,” Romney concluded.

In a June 2021 vote to confirm Jackson to the D.C. Circuit Court of Appeals, Romney joined most of his colleagues in opposing Jackson’s nomination. Only three Republicans—Sens. Lindsay Graham (R-S.C.), Susan Collins (R-Maine), and Lisa Murkowski (R-Alaska)—voted for her at the time.

Beyond Romney, these three Republicans are seen as possible swing votes to allow Jackson’s confirmation to go through on thinly bipartisan lines, but none have committed to voting for the nominee.

Graham, despite his support for Jackson to serve as district judge, sparred often with the nominee last week, and made clear his preference that Biden instead nominate South Carolina District Court Judge J. Michelle Childs.

During the hearings, Graham intimated at a behind-the-scenes plot to prevent Childs’ ascent to the Supreme Court, citing the efforts of left-wing activist groups like Demand Justice to secure Jackson’s nomination.

Graham also voted in favor of all three of the nominees sent to the Supreme Court by President Donald Trump.

Given the wide gaps between Jackson’s judicial ideology and his own, in addition to his concerns over how Jackson received the nomination, Graham has indicated that he will not support her confirmation in the House Judiciary Committee or on the Senate floor.

Murkowski has also remained uncommitted, but has suggested that Jackson’s track record on child pornography cases is “worth looking into.”

“If it really is a pattern, that’s something I think we should be paying attention to,” Murkowski said noncommittally. “If it’s an issue of one-offs that have been hyped into more than that, I think that’s something we need to try to discern.”

Collins is considered by some observers to be the Republican most likely to support Jackson’s confirmation.

Like other potential swing-voters, Collins has stayed mum on how she will vote, but she called the meeting between she and Jackson prior to the hearings “lengthy and productive.”

Collins also joined her colleagues in supporting Gorsuch and Kavanaugh, but voted against Barrett’s confirmation due to its proximity to the 2020 presidential election.

On the Democrats’ side, the most likely defector was Sen. Joe Manchin (D-W. Va.), who has become infamous among Democrats in the 117th Congress for his willingness to oppose the policy goals of the party and the White House.

However, Manchin said on March 25 that he will vote to confirm Jackson, leaving little room for doubt about her confirmation short of unexpected Democrat defections.

Jackson’s confirmation will face a vote in the Senate Judiciary Committee on April 4 before moving to a final floor vote.