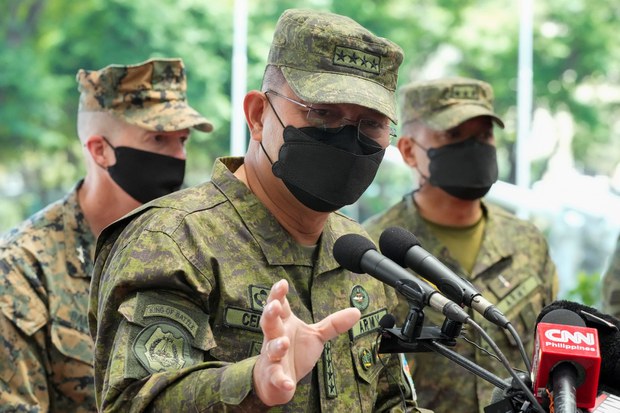 The Philippines and the United States kicked off one of their largest-ever joint exercises Monday with officials saying they hoped it would convey a message of strong bilateral military ties in the face of maritime challenges from China.

Philippine Defense Secretary Delfin Lorenzana said the exercises called Balikatan, which means “shoulder-to-shoulder” in Tagalog, “marks another milestone in the enduring alliance” between the two countries. The drills will end on April 8.

“This year’s Balikatan exercise is no ordinary iteration because it is the largest edition ever held, with almost 9,000 participants from the Armed Forces of the Philippines and the United States Indo-Pacific Command,” Lorenzana said in his opening remarks read out by his assistant at Camp Aguinaldo in Quezon City.

“We are, thus, sending a message to the world that the alliance between our countries is stronger than ever and that we remain committed to stand shoulder-to-shoulder in response to the evolving security challenges that face both our nations and the region,” Lorenzana said.

About 3,800 Filipino soldiers will join 5,100 American counterparts in the combined joint exercise – the largest since 2015 when 11,500 participated. The COVID-19 pandemic forced the 2020 exercise to be canceled and limited the number of participants to less than 1,000 in 2021.

The 2022 joint exercise began a day after the Philippine Coast Guard reported a March 2 “close distance maneuvering” incident involving one of its ships and the Chinese coast guard near Scarborough Shoal in the South China Sea.

Philippine officials said the Chinese ship sailed within 21 meters (69 feet) of the Philippine ship, and accused the Chinese Coast Guard of violating 1972 international regulations on preventing collisions at sea.

In Manila, the Chinese Embassy did not immediately return requests for comment, and the Philippine Coast Guard did not explain why it took more than three weeks for it to report the incident.

Speaking at Monday’s kickoff ceremony for Balikatan, Maj. Gen. Jay Bargeron, commanding general of the U.S. 3rd Marine Division, said the drills were part of efforts to maintain readiness and uphold commitments to the defense treaty.

Signed in 1951, the MDT calls on both countries to aid each other in times of aggression by an external power. The Pentagon previously said it was prepared to assist Manila if it invoked the treaty amid threats from other nations.

Bargeron stressed that the drills were “not at all” a show of force in light of concerns about Chinese actions around the disputed islands in the region, especially near Taiwan.

“Balikatan 2022 is a tremendous training opportunity and is aimed at improving our security, defensive capabilities and our readiness to respond to any crisis anywhere,” Bargeron said. “It is designed to enhance our interoperability, strengthen cooperation across the board and contribute to peace and stability in the region.”

China has laid claim to almost the entire South China Sea. Tension surrounding those actions has fueled diplomatic protests from Manila, which in 2016 won an international court ruling against Beijing’s territorial claims in the contested waterway.

Lorenzana, the Filipino defense chief, said this year’s drills were designed to boost the capability of both militaries to work seamlessly together so that “we can readily and jointly respond to our mutual security concerns,” including peace in the resource-rich sea region.

“The Balikatan exercises also affirm that the U.S. and the Philippines are not alone in espousing peace, security, and cooperation in the region,” he said. “We have been expanding the scope of the exercises through wider engagement and networking with our partners in the region.”

About 40 participants from the Australian Defense Force are observing the drills.

Meanwhile, during the opening of a security conference in neighboring Kuala Lumpur on Monday, a senior U.S. military official said multilateral cooperation was the best way to handle China’s territorial expansion in the South China Sea.

“[To solve] complex problems like this, it’s very helpful to have a multilateral approach and collective security that allows for free and open Indo-Pacific (waters),” Gen. Charles Flynn, the U.S. Army commander in the Pacific, told reporters in Kuala Lumpur.

“I think training exercises and the ability to get regional leaders together to understand the challenges that we each face on a personal level – I think that is the great counterweight to any adversarial action that happens,” he said.

Flynn stressed that regional military exercises and cooperation should continue.

Apart from the Philippines and China, other parties with South China Sea claims are Brunei, Malaysia, Vietnam and Taiwan. Indonesia has a separate spat with China over its exclusive economic zone.

Earlier this month, Adm. John C. Aquilino, the overall American military commander for the Indo-Pacific region, said China was learning from watching the Russian invasion of Ukraine – specifically about the “investment in blood” that would be required to launch such an attack, the international condemnation that followed, and the reactions of people to being attacked.

Asked if China wanted war with the U.S., Aquilino said Beijing had not ruled out the use of force.

“My task has been to be ready,” he said during a U.S. congressional hearing on national security challenges and military activities in the Indo-Pacific region.

“This is a real wakeup,” Aquilino replied when asked to compare the Russian invasion with what China could do against Taiwan. “We have to look at this and say, ‘hey, this could happen’…”

The U.S. participates in 120 exercises a year across the globe and is looking to expand, Aquilino said.

Nisha David and Ray Sherman in Kuala Lumpur contributed to this report by BenarNews, an RFA-affiliated online news service.