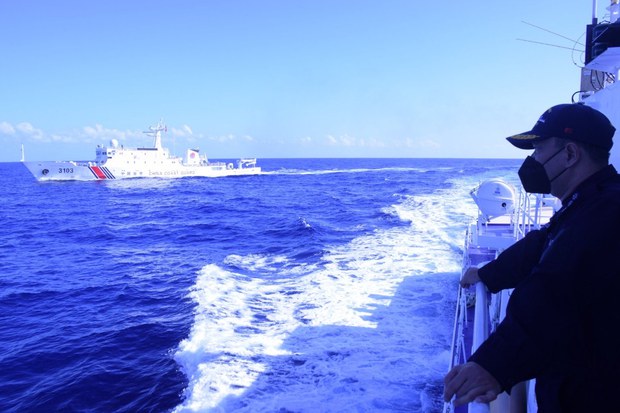 The Philippines lodged a new diplomatic protest against China after a Chinese coast guard ship maneuvered dangerously close to a Filipino vessel in the disputed Scarborough Shoal in early March, a senior official said Tuesday.

China’s foreign ministry, meanwhile, insisted that it was within its rights when its ship allegedly engaged in what the Philippine Coast Guard described as a “close distance maneuvering” in South China Sea waters.

“It’s done, we’ve filed a diplomatic protest regarding that,” National Security Adviser Hermogenes Esperon Jr. told reporters on Samar Island in the central Philippines, where he was attending a government event.

Similar incidents could occur over contending claims in Scarborough Shoal, he warned. Esperon heads the national taskforce for the West Philippine Sea, the Philippine name for territory claimed by Manila in the South China Sea.

On Sunday, the Philippine Coast Guard reported that a China Coast Guard ship had sailed within 21 meters (69 feet) of the BRP Malabrigo during a routine patrol on March 2.

That was the fourth time since May 2021 that Chinese Coast Guard ships had made that type of maneuver against Philippine vessels, Philippine officials said.

“It can always happen that vessels of the different countries, especially from the Philippines, Vietnam, Malaysia and other claimant countries and China, will get into close encounters simply because we have conflicting claims,” Esperon said. “There may be counter-claims but we, as a nation, will stand by our established sovereign rights and sovereignty over the area.”

He said Manila had been increasing its presence in the region through the Philippine Coast Guard and Bureau of Fisheries and Aquatic Resources.

Esperon also said there were fresh reports about other claimants to the potentially mineral rich sea region improving facilities on islands they occupy.

“That’s the situation there, just be aware of it. And Vietnam has 21 positions, we have nine stations, [while] China has seven strong positions,” he said.

Manila, which claims nine islands in the South China Sea, the biggest of which is the 92-acre Pag-asa Island (known internationally as Thitu Island), has been improving its facilities in the region in recent years “in the same manner that Vietnam is doing a lot of improvement” to theirs, Esperon said.

The national security adviser said the government would continue to assert its claims through “diplomatic channels and through the international community.”

“Can we afford to go to war? Not now or not in this instance. … [I]n general we want peaceful settlements of the conflicts in the area,” he said.

Manila issued the protest a day after Chinese foreign ministry spokesman Wang Wenbin insisted that China had sovereign rights over the shoal.

“China has sovereignty over Huangyan Dao and its adjacent waters as well as sovereign rights and jurisdiction over relevant waters,” Wang said, using the Chinese name for Scarborough Shoal.

“We hope that Philippine ships will earnestly respect China’s sovereignty and rights and interests, abide by China’s domestic law and international law, and avoid interfering with the patrol and law enforcement of the China Coast Guard in the above-mentioned waters,” he said during a media briefing on Monday.

For years, the shoal has been a traditional fishing ground for Filipinos but since 2012 it has been under virtual control by China, which has maintained a constant coast guard presence. After a tense standoff, Manila said the United States brokered a deal for both sides to pull out of the shoal but China reneged on it.

In 2016, an international court ruled in favor of the Philippines in a South China Sea territorial dispute. Instead of moving to enforce the internationally accepted deal, President Rodrigo Duterte moved to appease Chinese leader Xi Jinping in exchange for cordial ties and billions in Chinese investments.

Apart from China and the Philippines, other claimants to South China Sea territories are Vietnam, Brunei, Malaysia and Taiwan. Indonesia is locked in a separate dispute with China which claims parts of the sea that is within Jakarta’s EEZ.

Also on Tuesday, Malaysia Defense Minister Hishamuddin Hussein said that the South China Sea “is ultimately a region of shared responsibility, a region which we in ASEAN are collectively responsible for,” referring to the Association of Southeast Asian Nations.

“Issues around the South China Sea have always made headlines. As much as strongly worded statements are likely to grab attention, we must strive to ensure that cooler heads prevail,” Hussein said during the Putrajaya Forum, a security conference organized by the Malaysian Institute of Defense and Security and the Malaysian Defense Ministry.

“Though we are in the business of defense and security, de-escalating a high-stakes situation is a task in itself. A task that we must all put above all else lest we risk compromising the peace and stability in the region,” he said.

Hussein told those at the conference that tensions between nations must be diffused “through all available means.

“Due to the complexity and sensitivity of the issue, through established international laws and conventions, all parties must work together to increase efforts to build, maintain and enhance mutual trust and confidence so that we can maintain peace, security and stability in the South China Sea.”

Nisha David in Kuala Lumpur contributed to this report by BenarNews, an RFA-affiliated online news service.