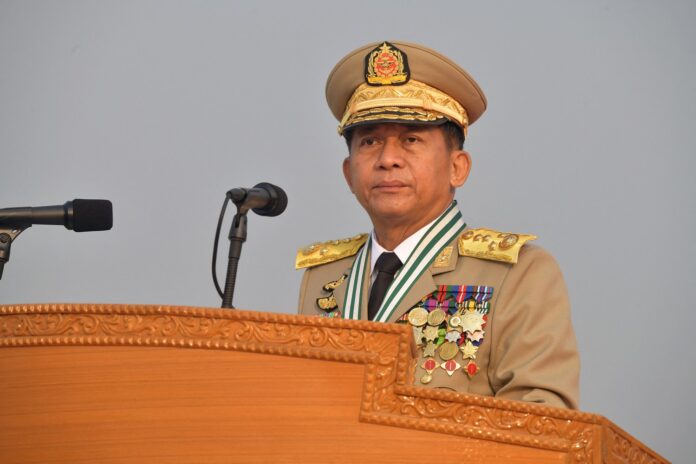 Junta chief Snr. Gen. Min Aung Hlaing vowed to crush the country’s opposition in an address marking Armed Forces Day over the weekend, but observers said Monday that the regime must negotiate if it hopes to maintain its grasp on power.

Speaking in Naypyidaw on Sunday, Min Aung Hlaing condemned the shadow National Unity Government (NUG) for trying to unseat him and said the junta will not take part in a dialogue with the group.

“We, the military, are fighting internal insurgency and terrorism to bring peace and stability to the whole country,” he said.

“We will not negotiate with these groups or their minions who are killing innocent people and government servants and threatening the nation’s peace and stability,” he added, referring to People’s Defense Force (PDF) paramilitary units that have aligned with the NUG and are fighting government troops throughout the country.

Min Aung Haing’s delivered his ultimatum a year to the day that security forces killed as many as 163 anti-coup protesters in what is thought to be the bloodiest day of violence in Myanmar since the military seized power in a Feb. 1, 2021, coup.

His comments also came four days after a March 21-23 visit by Prak Sokhonn, the Association of Southeast Asian Nations’ (ASEAN) special envoy on the situation in Myanmar. Although he traveled to the country with the goal of meeting all the country’s stakeholders, Prak Sokhonn did not meet with anyone from the NUG during his trip. He said that a request to speak with Aung San Suu Kyi, the detained head of the deposed National League for Democracy (NLD), was blocked by the junta.

Since the coup, authorities have killed more than 1,700 civilians and detained nearly 9,950 others — mostly during peaceful anti-junta protests, according to the Bangkok-based Assistance Association for Political Prisoners. However, the junta has faced tough resistance since launching offensives against ethnic insurgents and branches of the PDF loyal to the NUG in the country’s remote border regions.

A report released last week by the Myanmar Institute for Strategic and Policy Studies documented at least 3,302 clashes across the country in the 13 months after the military coup, a three-fold increase from prior to the takeover.

Kyaw Zaw Han, a military and national security analyst at the Australian National Security College, told RFA that the junta cannot end unrest in Myanmar through fighting alone and will eventually have to invite the NUG to the negotiating table.

“There are many examples of governments holding talks with organizations they declared terrorists,” he added. “Negotiations will eventually take place when there is a balance of power.”

Naing Htoo Aung, permanent secretary of the NUG’s defense ministry, said that by pledging to crush the shadow government and the PDFs, Min Aung Hlaing is signaling that he intends to ratchet up repression of Myanmar’s public as well.

Min Zaw Oo, a security and military observer, told RFA’s Myanmar Service that the fighting is likely to worsen because of Min Aung Hlaing’s decision to rule out talks.

“The number of battles has increased [since the coup] and expanded to areas where there were no battles before,” he said.

“Large-scale battles are unlikely, especially this year, as the PDF forces do not have enough weapons or ammunition. However, there could be serious fighting in areas close to territories controlled by [insurgent groups].”

Prak Sokhonn’s visit last week was highly anticipated by observers who say that leaders of the NLD, which won Myanmar’s November 2020 election by a landslide, and other stakeholders must be given a seat at the table for any negotiations on the country’s political future.

Allowing the ASEAN envoy to meet with all parties is a key stipulation of the Five-Point Consensus agreed to by Min Aung Hlaing during an emergency gathering of the bloc in April last year. However, ASEAN operates under a policy of non-interference in the internal affairs of its member nations and such agreements are non-binding.

At the end of his trip, Prak Sokhonn acknowledged that the junta had failed to make any real progress on implementing the other points it agreed to in the 5PC, including ending the use of violence against civilians. He said ASEAN would refrain from inviting its representatives to bloc gatherings until it had done so, a policy that has been in place for months.

While ASEAN has attempted to work with the junta to end violence in Myanmar, other members of the global community have sought to force it to do so through sanctions and condemnation.

Nonetheless, the junta continues to enjoy support from some of its closer allies, including Russia and China, which have sold arms and attack aircraft to the regime.

On Sunday, the rights group Justice For Myanmar said in a statement that as a major supplier of arms and dual use goods to Myanmar’s military, Russia is “aiding and abetting the military’s genocide, war crimes and crimes against humanity,” and called for international action to stop the trade.

It called for sanctions against 19 companies that it said have supplied Myanmar since 2018, including multiple subsidiaries of the Russian state-owned arms giant, Rostec, as well as manufacturers of missile systems, radar and police equipment. The group said many of the companies it identified have exported to Myanmar since the coup.

In its statement, Justice For Myanmar also urged the government of Singapore to take action against brokers who facilitate payments for the arms purchases from within its borders.