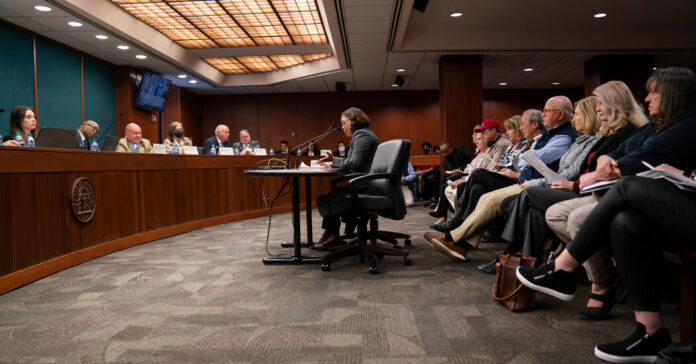 During the hearing on Monday, State Senator Butch Miller, a Republican and member of the State Senate Ethics Committee, appeared to consider some of the officials’ concerns.

“I think we’ll probably have additional work to be done,” he said. While Mr. Miller said he was not interested in sweeping changes to the bill, he also said he was not opposed to “tweaking them and accommodating certain issues.” The committee has not yet scheduled a vote on the bill.

Election officials warned about language they considered too broad in a provision that restricts third-party donations to election offices. The proposal is popular among Republicans who believe grants from an organization tied to Mark Zuckerberg, the chief executive of Meta, had undue influence in the 2020 election. Some Georgia election officials said the legislation would require any organization that makes a donation to receive approval from the state board of elections. That could include churches or other local groups that offer their buildings as polling locations.

“By a strict interpretation of this particular provision, that would be a grant of gift or donation,” Milton Kidd, the elections director in Douglas County, a deeply Democratic county, said in an interview.

Mr. Kidd added that many churches did not have staff to handle the application process, which could threaten his ability to maintain enough polling locations.

Officials also took issue with a provision requiring partisan poll watchers to be given “meaningful access” to observe the ballot-counting process. The language might jeopardize the privacy of the ballot, they said.

“I am a big fan of poll watchers, of being observed, I want my polling places to have observation, it’s a very important part of the process,” said Mr. Kirk, the administrator in Bartow County, which is northwest of Atlanta. “But it’s also very important to have guardrails on that observation, to keep it from becoming disruptive, to make sure a person’s information stays safe.”