Food Prices to Soar 5 Percent on Average This Year: USDA 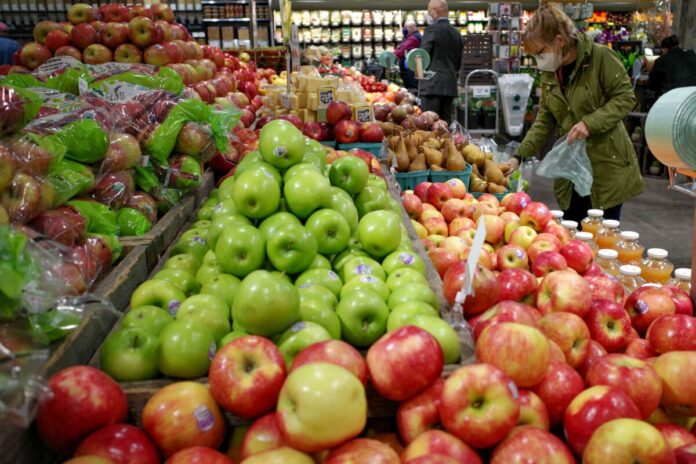 The U.S. Department of Agriculture expects food prices to soar 5 percent on average this year, marking the highest single-year surge since 2008, which is set to leave Americans forking out more for everyday food essentials.

In its monthly Food Price Outlook, the USDA said it has raised its estimate following two months of price surges “across many of the food categories.”

The department attributed the price hike to the “impacts of the conflict in Ukraine and the recent increases in interest rates by the Federal Reserve” which it said are expected to “put upward and downward pressures on food prices.”

Increased prices will affect everything from basic items such as meat, poultry, eggs, and dairy products, to fresh fruits, sweets, cereals, and bakery products, and nonalcoholic beverages, according to the department.

It also noted that there have been historically low levels of frozen chicken stocks in recent months as well as an ongoing outbreak of highly pathogenic avian influenza (HPAI), also known as “bird flu,” which it said could “contribute to poultry and egg price increases through reduced supply or decrease prices through lowered international demand for U.S. poultry products or eggs.”

Earlier this month, the Nebraska Department of Agriculture (NDA) announced that a commercial flock of 570,000 chickens in Butler County was set to be killed in a “humane manner” after contracting HPAI.

Elsewhere, dairy product prices are expected to increase between 4 and 5 percent in 2022; fats and oils between 6 and 7 percent; fresh fruit between 5 and 6 percent; and processed fruit and vegetable prices between 4.5 and 5.5 percent, USDA said.

Cereals and bakery product prices are predicted to rise between 3 and 4 percent, while nonalcoholic beverage prices are set to increase between 3.5 and 4.5 percent.

Meanwhile, food-at-home prices are predicted to increase between 3 and 4 percent this year.

The USDA’s outlook comes as President Joe Biden said on March 24 that both the United States and Canada may have to increase their food production in an effort to offset shortages in Europe caused by the ongoing Russian invasion of Ukraine.

Both countries are among the world’s top producers of agricultural commodities and specialize in products such as wheat, maize, rapeseed, sunflower seeds, and sunflower oil, and are also top exporters of fertilizers.

“It’s going to be real,” said Biden at a press conference. “The price of the sanctions is not just imposed upon Russia, it’s imposed upon an awful lot of countries as well, including European countries in our country as well.”

Biden said the United States is “in the process of working out with our European friends what it would be—what it would take to help alleviate the concerns relative to food shortages.”

However, food prices had already been steadily increasing across the United States prior to Russia’s invasion of Ukraine, as inflation hit a 40-year high.

A recent NBC News survey revealed that 6 out of 10 families in the United States reported their cost of living is increasing faster than their income.