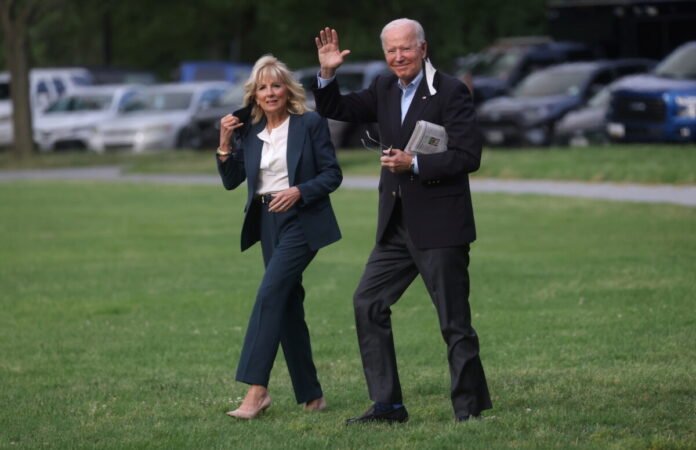 First Lady Jill Biden was forced to cancel a community college class after a bomb threat was sent to the Northern Virginia Community College on Tuesday, the school and a spokesperson said.

Biden was told about the threat at Northern Virginia Community College before she left the White House on Tuesday morning, her spokesman Michael LaRosa told news outlets. “At no point was she in any danger,” LaRosa said.

The Epoch Times has contacted the first lady’s office for comment.

Earlier, an alert was sent out by the school on Twitter. The nature of the bomb threat was not disclosed.

“CODE RED Alexandria Campus is closed today due to a bomb threat and the college has evacuated the area. Follow instructions of authorities and avoid area,” NOVA Community Colleges wrote on Twitter.

North Virginia Community College’s website as of noon Tuesday displayed a message that read: “All campuses closed at 11:30AM. In-person classes are cancelled; remote classes continue as scheduled.”

Biden, 70, is listed on the NOVA website as a nine-month professor who teaches at the Alexandria campus. It’s not clear exactly what class she teaches, but the White House has said previously that she instructs writing and English at the school.

It comes weeks after Doug Emhoff, the husband of Vice President Kamala Harris, was evacuated from an event at a Washington, D.C. high school due to a bomb threat that was issued on Feb. 8.

“We have to go,” a Secret Service agent was heard telling Emhoff during an event at Dunbar High School, according to an Associated Press reporter. Photos captured by the news agency also showed him being grabbed by the arm and being moved by the agent.

Kristen Metzger, a D.C. Police spokeswoman, told The Washington Post at the time police were informed of the bomb threat but no item or device was found.

“A 16-year-old juvenile male, of Southeast, DC, has been arrested and charged with Terroristic Threats in connection to multiple bomb threats yesterday,” the D.C. Police Department said on Twitter on Feb. 10, adding the agency “continues to investigate these incidents with our federal partners.”

And “another 16-year old juvenile male, of Northwest, DC, has been arrested and charged with Terroristic Threats in connection to a bomb threat at Kipp DC College Preparatory” school, it added.