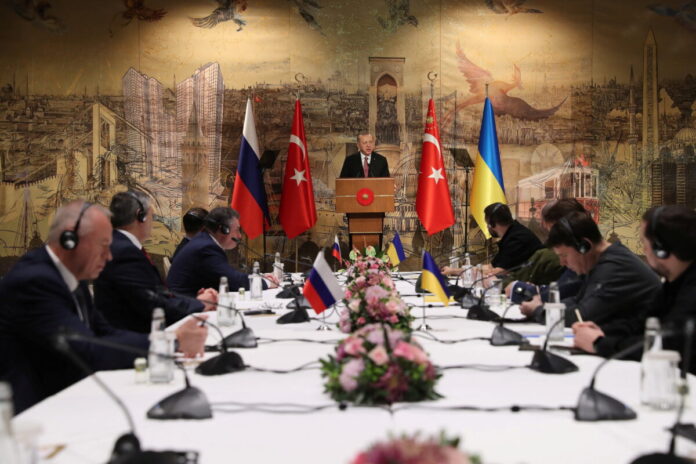 Face-to-face peace talks have resumed as negotiators from Russia and Ukraine met in the Turkish capital Istanbul in a search for common ground that would put an end to the war that has killed thousands and driven millions from their homes.

Turkish President Tayyip Erdogan welcomed the delegates, saying that “stopping this tragedy” was up to them.

“We hope that your meetings and your consultations will be auspicious for your countries, for our region, and for all of humanity,” Erdogan told the delegates at the start of the talks.

NATO member Turkey shares a maritime border with Ukraine and Russia in the Black Sea, has good ties with both, and has sought to mediate the conflict. Turkey-mediated talks in Antalya several weeks ago between the foreign ministers of both sides led to no progress on a ceasefire.

The Turkish president said he had spoken by phone in recent days with both Russian President Vladimir Putin and Ukraine President Volodymyr Zelenskyy, with Erdogan saying their conversations had revived expectations for a negotiated settlement.

“In line with the instructions from your leaders, the negotiations that you are running have given fresh hope for peace,” Erdogan told the negotiators ahead of Tuesday’s discussions.

In a video address ahead of the talks, Zelenskyy said his country is prepared to declare its neutrality, a key demand on Moscow’s part, and is open to compromise on the fate of the Donbas, the contested region in eastern Ukraine.

“A new round of negotiations is ahead, because we are looking for peace. Really. Without delay,” Zelenskyy said.

Ukraine’s priorities for the talks are well known, he said, with the country’s sovereignty and territorial integrity “beyond doubt” and meaningful security guarantees “mandatory.”

“Our goal is obvious—peace and the restoration of normal life,” Zelenskyy said.

In an interview with a number of Russian media outlets, Zelenskyy said that security guarantees, Ukrainian neutrality, and the country’s nuclear-free status are the most important issues in talks to put an end to the war.

Russia calls the invasion a “special military operation” to “demilitarize” and “de-Nazify” Ukraine, generally understood as some form of degradation of Ukraine’s military forces and an ouster of its political leadership.

Zelenskyy insisted these two matters would not be the subject of the talks.

The Ukrainian president reiterated his earlier view that any terms of a peace deal would have to be put to a referendum in Ukraine, while insisting that before a compromise is put to a popular vote there needs to be a full withdrawal of Russian forces from his country.

Kremlin spokesperson Dmitry Peskov told reporters in Moscow that the decision to proceed with face-to-face talks in Istanbul is “important” and provides opportunity for negotiations to move forward in a “focused, tighter, and meaningful way,” according to state-backed press agency Tass.

Peskov added that, “regrettably, we cannot say there have been any significant achievements or breakthroughs so far” in the talks.

The spokesperson also declined to go into any details of what Russia’s expectations or demands were for the discussions in Istanbul, saying such disclosure would be “harmful” to the negotiations.

More than a month into the conflict, more than 3.8 million people have fled abroad, thousands have been killed and injured, and Russia’s economy has been hammered by sanctions.