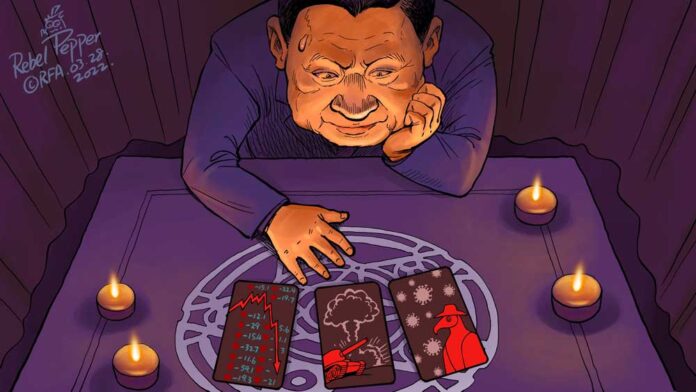 Any hope that Chinese Communist Party chief Xi Jinping may have had for a quiet 2022 to ease the path to his anointment in autumn to an unprecedented third term as party chairman and state president vanished early in the face of a coronavirus outbreak, real estate and energy problems hurting the economy, and his Russian ally Vladimir Putin’s invasion of Ukraine. China’s worst COVID-19 surge since the 2020 Wuhan outbreak has prompted lockdowns of tens of millions of people, hitting consumer spending and supply chains. China’s awkward stance on the war on Ukraine–proclaiming neutrality, but sticking to Moscow’s line and censoring reports on the conflict, while its diplomats and state media spread anti-U.S. conspiracy theories–has won Xi few friends in the wealthy democratic West, and Beijing faces the risk of being hit by secondary versions of the crippling economic sanctions imposed on Russia if it steps up material support for Putin.