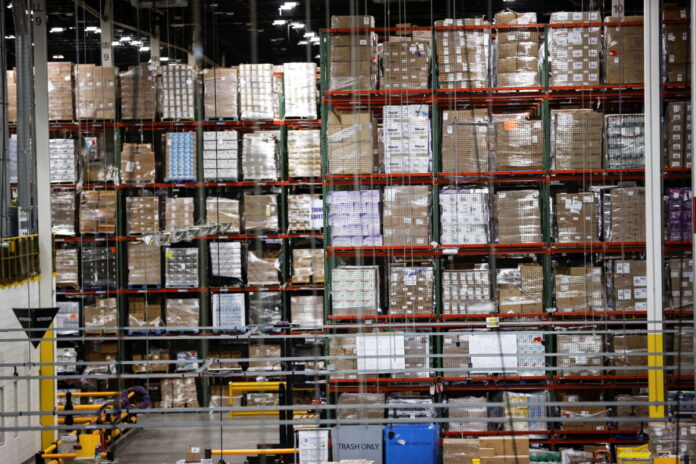 The goods deficit topped $1 trillion for the very first time last year for an all-time high.

The trade deficit has subtracted from U.S. GDP growth for the sixth quarter in a row.

February’s dip only slightly reversed January’s record high, suggesting that the trade deficit would continue to factor in on economic growth in the near future.

The value of imports rose only 0.3 percent, which was constrained by a massive 9.9 percent slump in motor vehicle imports, as well as a 3 percent drop in food imports.

U.S auto exports also fell as well by 3.4 percent, with auto inventories facing a mere 0.9 percent rise in growth after a 2.5 percent surge in January.

The major drop in both auto exports and imports, as well as inventories, reflects ongoing shortages of computer chips that have curtailed production by vehicle manufacturers worldwide.

A jump in exports in U.S. consumer goods, foods and feeds, and industrial supplies such as oil led the boost, which were not adjusted for inflation, have offset a big decline in imports of autos and food.

American wholesale inventories in February rose by 2.1 percent on a monthly basis, surpassing the market expectation for an increase of 1.7 percent, after climbing 1.1 percent in January.

The recent report showed that businesses continued to restock last month, but at a slower pace from late 2021.

A few economists believe the pace of inventory investment is sufficient to contribute to GDP growth in 2022, while others suggest that it will offer little contribution, as inventories would need to increase at a faster rate than in the fourth quarter to contribute to growth.

Most estimates for U.S. GDP growth in the first quarter are below a pace of 1 percent.

Analysts believe that exports are being lowered by higher prices rather than increased volumes.

Consumer spending habits during the pandemic switched from services over to goods, leading to a boom in imports, as U.S. manufacturers were hit with labor shortages and a supply chain crisis.

The slowdown in imports in February may have likely reflected the disruption of U.S.-Canadian trade during the Canadian trucker protests.

Domestic companies have been struggling since last year to boost production due to high demand, with little sign of a slowdown for the foreseeable future, even with rising inflation, transit delays, and supply shortages.

There is also serious concern about the fallout of the war in Ukraine and the latest Chinese COVID lockdowns on global trade and exports.

The rising price of fuel is adding to higher U.S. deficits, which have only worsened since the Russian invasion of Ukraine pushed the cost of oil over $100 a barrel.

However, strong figures for imports of both capital and consumer goods point to resilient demand from businesses and consumers despite rising costs.

The Commerce Department will release a more comprehensive February trade report that will include the balance on services and data on tourism and travel on April 5.