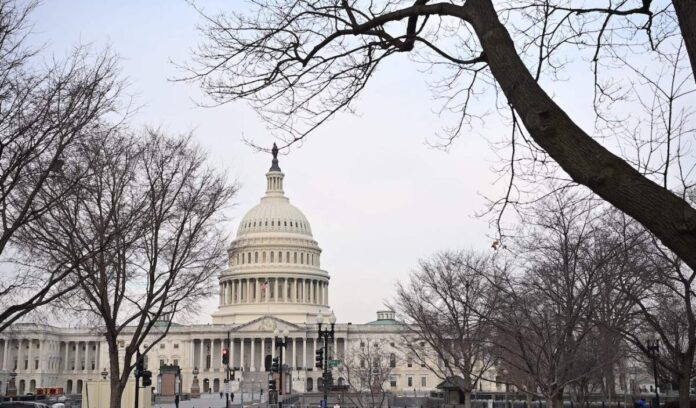 Rep. Rodney Davis (R-Ill.) blasted the House sergeant at arms and Capitol physician for their plans to reopen the Capitol after two years of closure using a “phased” approach.

House Sergeant-at-Arms William J. Walker and Capitol physician Brian P. Monahan said in a March 23 memo announcing the reopening: “We are pleased to announce that on Monday, March 28, 2022, public tours of the Capitol will resume with a limited number of Member-led, staff-led tours and school groups.

“We appreciate your continued patience and cooperation as we work together to resume public tours of the Capitol for the American people in a way that protects the health and safety of visitors and institutional staff alike.”

During the first phase of reopening, they wrote that “tours to the Capitol will be monitored by Visitor Services so that modifications can be made if recommended by the Attending Physician.”

They said that although the Capitol will reopen, it could be closed again because of “COVID-19 conditions,” and that same-day negative COVID-19 tests are “recommended for all visitors.”

In a March 28 memo, Davis, who sits on the House Administration Committee as the ranking GOP member, decried the slow reopening.

“You can’t call today’s phased ‘reopening’ a reopening at all,” Davis wrote.

“This gradual process would’ve made sense a year ago, but we are no longer in extraordinary times and we need to fully reopen the People’s House. Schools, businesses, music concerts, sporting events, and other widely attended events across the country have resumed normal operations, but instead of leading by example, Congress is dragging its feet.

“March is typically a busy time of year, with thousands of Americans roaming the halls, meeting with their representatives, and exercising their constitutional right to petition their government. In contrast, today the Capitol remains largely closed for the 745th day, with some members not even showing up to vote in nearly two years.”

“I think we can safely get back to the Capitol and do it in a way that protects everybody,” Davis said in a statement at the time.

While Republicans have pushed since almost the beginning of the CCP (Chinese Communist Party) virus pandemic for the House to lift its emergency rules and restrictions, Speaker of the House Nancy Pelosi (D-Calif.) has refused, saying that she deferred to the Capitol physician’s advice.

In early February 2022, some Democrats suggested that they were starting to shift in favor of lifting the rules as well.

However, it was not until President Joe Biden’s March 1 State of the Union address that the tide began to turn against some of the COVID-era House rules.

“Because of the progress we’ve made, because of your resilience and the tools we have, tonight I can say we are moving forward safely, back to more normal routines,” Biden told the nearly-maskless room of lawmakers.

The day after Biden’s address, Rep. Bryan Steil (R-Wis.) spearheaded another GOP effort to end the House’s closure to the public. Steil’s House resolution, cosponsored by over 80 Members of Congress, would have fully reopened the Capitol.

“We proudly consider this a government of the people, by the people, and for the people,” Steil said in a statement about the resolution. “But to truly serve the people, we must make this institution accessible to the public. Today, we stand united as House Republicans to deliver a clear message to Speaker Pelosi—reopen the People’s House today.”

Republicans were not alone in criticizing the slow reopening of the Capitol.

In a statement following Walker and Monahan’s memo announcing the plan, Del. Eleanor Holmes Norton (D-D.C.) applauded the move but said the Capitol should have been reopened much earlier.

“I appreciate today’s announcement that the Capitol will reopen to a limited number of tours,” she said. “Capitol tours are particularly useful as educational tools, and prior to the pandemic, schools in D.C. and throughout the country wisely took advantage of them often.

“However, since the Capitol was first closed to the public because of the pandemic, vaccines have proven effective at preventing severe symptoms, hospitalization, and death.

“America’s symbols of democracy should be accessible to the people we serve. Already, the distance between government and the people has grown, with trust in government at historic lows. We should not entrench that distance further or longer by delaying the reopening of the Capitol, especially when the tools exist to prevent serious illness and death from COVID-19.”

Even after these mandates were lifted, other COVID-era rules—particularly the controversial practice of proxy voting, which Democrats used heavily in 2021—remain in place.

Since mid-2021, Republicans have promised an end to any remaining COVID rules, and Leader McCarthy has said that a GOP House would end proxy voting.