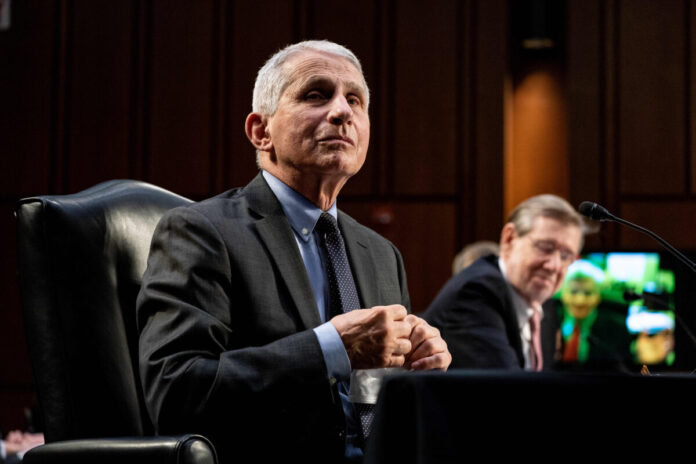 Dr. Anthony Fauci flagged an article in an email to the director of the Centers for Disease Control and Prevention (CDC), highlighting portions that said the CDC’s guidance to impose 6-foot social distancing in schools was not based on science.

Fauci, the longtime director of the National Institute of Allergy and Infectious Diseases, sent a STAT News op-ed to Dr. Rochelle Walensky, the CDC’s director, on Feb. 20, 2021.

“You probably have already seen this. But just in case, you should be aware of it,” Fauci wrote.

Fauci highlighted several paragraphs from the article, penned by Dr. Vinay Prasad and political science professor Vladimir Kogan, including a line that says the social distancing guidance was “not supported by science.”

The authors wrote that the distancing recommendation seemed to be based on “decades-old research,” pointing to an analysis by experts published by the British Medical Journal.

In contrast with authorities in the United States and some other countries, the World Health Organization and other health bodies advised distancing of one meter, or about 3 feet.

Walensky herself, before being appointed to head the CDC, told her local school district that distancing in schools of 3 feet was “quite safe.”

Walensky defended the 2020 opinion in 2021, arguing the science had shown distancing rules should be more strict, but the op-ed authors asserted the evidence that had developed “actually seems to argue against requiring strict adherence to a 6-foot rule,” including a growing body of knowledge that transmission of the virus that causes COVID-19 not stemming from the spreading of droplets.

The op-ed was in reaction to CDC school opening guidelines released by the CDC about a week prior.

The agency said schools could safely reopen, but should mandate masks and implement other measures aimed at reducing transmission of SARS-CoV-2, or the CCP (Chinese Communist Party) virus, which causes COVID-19.

Some school officials later said they were unable to fully reopen schools because of the distancing guidance, since only a certain number of students could fit into a classroom if the guidance was followed.

Another portion of the op-ed highlighted by Fauci asserted the guidelines did not promote President Joe Biden’s goal of getting schools reopened as soon as possible. Instead, the authors said, the guidelines “will work to provide political cover for interest groups and districts that want to delay in-person school.”

Just one day after Fauci wrote to Walensky, he appeared on CNN’s “State of the Union” and advised schools to follow the CDC guidance.

“If you do the four or five things that the CDC recommends, the bottom-line goal that I think people need to remember is that—and I have said this way before the CDC guidelines came out—that the default position is to do whatever you can, as best as you can, to get the children back to school, with safety concerns for the children and for the teachers and the educational personnel,” he said.

The CDC about a month later updated its guidance to say distancing between students could be as little as 3 feet, provided community transmission of COVID-19 wasn’t high in the community where the school was located.

Fauci’s message, like those missives, was obtained through a Freedom of Information Act (FOIA) request. The message was obtained by Americans for Public Trust and published by Fox News.

Sen. Rand Paul (R-Ky.) shared the Fox article containing the message and others from the FOIA request and said it was “unacceptable for the CDC to be this careless.”

“I’m entirely committed to investigating Fauci because of the panic and harm he’s inflicted on our children, citizens, and economy during this ‘pandemic,’” Paul wrote on Twitter.

A number of Republican members of Congress have vowed to launch investigations into Fauci and other top U.S. health officials over the federal government’s pandemic response, provided the GOP gains control of the House of Representatives and the Senate in the upcoming midterm elections.

Walensky and Fauci did not respond to requests for comment.